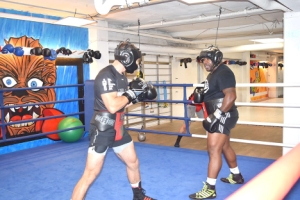 Grand Bahamian native, Sherman “Tank “Williams keeps trudging on. The 44-year-old heavyweight champion of The Bahamas is not as nifty as he once was. He does not launch that vaunted overhand right (conch punch) with constant effectiveness, as before, but today, he stands as the biggest name in boxing for The Bahamas.

He is presently the top boxing ambassador for the country, making waves in Europe and solidified as a major sports attraction. It’s the way of the boxing world these days. Fighters are marketable at an age when they would have long been retired decades ago.

For instance, there is a chance that Williams will have a return match with former multi-world champion Evander Holyfield, if Danish promoter, Morgan Palle, can fit the pieces. At a recent press conference held in Copenhagen, Denmark by Palle, Williams was announced for two upcoming bouts, October 29 and December 10. According to the veteran, a Williams-Holyfield II was proposed and he accepted. Accordingly, Palle is now having talks with the Holyfield camp in an effort to reach an agreement.

Holyfield is 53 and turned professional 32 years ago. Still, he is marketable and interestingly enough a second encounter with the Bahamian could bring him back to the ring. Ironically, the last time JHolyfield fought was in 2011 when he defeated the then Danish champion Brian Neilsen via the TKO route.

“I’m excited. Danish Television and the promoter are interested. After Holyfield quit in our fight (January 22, 2001 no contest) he went on that same year to stop Brian Neilson. There is big interest here in a second match between us,” Williams informed.

Presently, he is working out at the Boxing Institute in Copenhagen.

“Training is going well. I’m sparring four days a week with Danish heavyweights Pier Madsen and Tobias Konig. Younger guys benefit from the sessions as I show them ring generalship, how to move, how to hit and not get hit, and such techniques. I’m enjoying the opportunity to represent and be the sports ambassador for my country. The promoter will be hanging up a Bahamian flag in the gym. I like providing opportunities to bring exposure to my country,” said Williams.

He is indeed an ultra-sports ambassador. The Bahamas Ministry of Tourism’s marketing program benefits handsomely from Williams, particular in Europe where his, is a noted name.

Williams is a perfect candidate also, for the mentors the Ministry of Sports will be bringing on board for the National Sports Academy.

Williams’ has a rich sports background. He was a quality amateur boxer and represented the country at that level several times before moving into the professional rank. As a professional, he has been one of our greatest pugilists and is earmarked for the National Sports Hall of Fame.

The career continues to be embellished through his European connections.

Middleweight Taureano Johnson’s career is presently on the shelf, so the Tank is our prime boxer at the moment.