UN envoy de Mistura says federalism would have to be discussed at Geneva talks, amid reports of push from major powers. 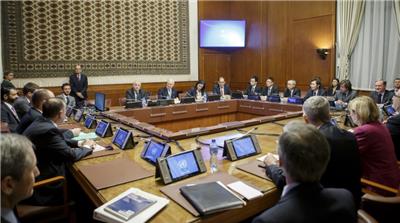 The United Nations envoy to Syria, Staffan de Mistura, has said that the possibility of federalism for the war-ravaged country has not been taken off the table for the upcoming peace talks in Geneva.

The latest round of negotiations in the Swiss city, scheduled for Monday, coincide with the fifth anniversary of a conflict that started with protests against President Bashar al-Assad before descending into a multi-sided war.

Neither the opposition nor the government has yet confirmed its participation.

Diplomats told the Reuters news agency that major powers close to the UN-brokered talks were discussing the possibility of federal division in Syria that would grant broad autonomy to regional authorities, while maintaining the country’s unity as a single state.

“All Syrians have rejected the division [of Syria] and federalism can be discussed at the negotiations,” de Mistura told Al Jazeera.

He also said that the prospects for reaching a deal to end the war were better than at any time before.

A UN Security Council diplomat told Reuters that a number of major Western powers had been considering the possibility of a federal structure for Syria and had passed on suggestions to de Mistura.

Speaking in September, Assad did not rule out the idea of federalism, but said any such change should only come about as a result of dialogue among Syrians and a referendum to ratify any changes to the constitution.

“From our side, when the Syrian people are ready to move in a certain direction, we will naturally agree to this,” he said at the time.

After five years of war that has killed 250,000 people and driven about 11 million from their homes, Syria’s territory is already divided between various parties, including the government and its allies, Western-backed Kurds, opposition groups and the Islamic State of Iraq and the Levant (ISIL, also known as ISIS).

However, Syrian opposition coordinator Riad Hijab said “any mention of federalism or something which might present a direction for dividing Syria is not acceptable at all”.

“We have agreed we will expand a non-central government in a future Syria, but not any kind of federalism or division,” Hijab said.

In contrast, the co-leader of the Syrian Kurdish PYD party, which has wide influence over Kurdish parts of the country, has made it clear that the PYD is open to the idea.

“What you call it isn’t important,” the PYD’s Saleh Muslim told Reuters on Tuesday. “We have said over and over again that we want a decentralised Syria – call it administrations, call it federalism – everything is possible.”

Fighting in Syria has slowed considerably since a fragile “cessation of hostilities agreement” brokered by the US and Russia came into force almost two weeks ago. But an actual peace deal and proper ceasefire remain elusive.

The biggest sticking point in the peace talks remains the fate of Assad, who Western and Gulf Arab governments say must go at the end of a transition period envisioned under a roadmap hammered out in Vienna last year by major powers.

Assad’s backers Russia and Iran say Syrians themselves must decide on his fate.

The next round of Syria peace talks is not expected to run beyond March 24. After that round ends, there is expected to be a break of a week or 10 days before they resume.