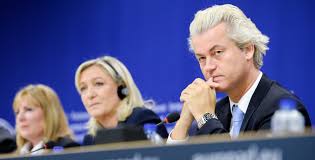 Civil war, treason, rape, persecution. Pernille Vermund, leader of the Danish far-right party “the New Conservatives”, has no shortage of words to describe Denmark’s dystopian future if immigrants have their way.

While her predictions seem an unlikely trajectory for the happiest country in the world, which houses fewer immigrants than any of its immediate neighbours – not taking her seriously may just help propel her to the top.

Referring to immigrants as lazy, disloyal, ungrateful and criminals, Vermund regularly lashes out at those who are sympathetic to immigrants because they “accept … the subjugation of women, children, homosexuals and non-Muslims.”

Like Geert Wilders in The Netherlands and Marine Le Pen in France, Vermund objects to “establishment politics.”

She levels harsh criticism at her political rivals for being “too soft” on immigration and for doing “too much talking.”

Vermund’s anti-Islam sentiments and the rhetoric she uses to illustrate the gap between “the people” and “the elites” resonate with Danish voters. They commend her for her “straight talk” and ability to “get things done.”

The similarities with Donald Trump are striking. Her party polled at 4.8 percent in late February – impressive for one founded less than two years ago.

Similar to her European peers, Vermund’s party refrains from the homophobia, anti-Semitism and religious conservatism expressed by traditional far-right groups, claiming instead to defend liberal values against a new enemy: Islam.

Appeals to individual freedoms, calls for Denmark to leave the EU and ultra-liberal economic policies draw in voters who traditionally would have avoided fringe groups such as Vermund’s party.

This helps to explain how seven out of 10 of her potential voters are not only male, white and middle-aged, but also reasonably wealthy and in possession of a university degree.

Like Wilders, who is expected make substantial gains in the upcoming general elections in the Netherlands, Vermund’s chances of leading the country any time soon are very slim.

This is due in part to the system of proportional representation and Denmark’s tendency to form minority coalition governments, but it does not mean that she cannot still gain significant influence.

Not yet in parliament, and a relative new-comer on the political scene, Vermund is a talented communicator who comes across as calm, accessible, and to-the-point even when pressed on issues she does not appear particularly knowledgeable on.

A regular participant in mainstream political TV talk shows, and with a column in one of the most widely read tabloid newspapers in Denmark, she is both well-known and a frequent object of derision from much of the liberal left and mainstream media.

Her controversial statements are criticised in the most emphatic of terms, but attractive narratives are seldom offered to those who already agree with her, or those she might win over.

The home of “hygge”, the Danish word for a feeling of cosiness, Denmark has in recent years introduced legislation and initiatives labelled as draconian by both national and international media.

This includes most notably the passing of a law in 2016 that permits authorities to confiscate the personal possessions of asylum-seekers, and the government taking out advertisements in a Lebanese newspaper to dissuade refugees from coming to Denmark.

More recently, the Danish parliament issued a non-binding statement in February, which suggested that to be considered “Danish”, both of your parents must be Western.

Coming across as controversially anti-immigrant in an environment that has moved so far towards the political right might seem like a real challenge.

But Vermund and her party appear to be succeeding with their unusually harsh language, for example comparing the 1951 Refugee Convention to “Sharia law” because it – like sharia law, Vermund contends – is “out of touch with reality” and “a remnant of the past”.

As a charismatic woman in her early forties, she comes across as determined with strong opinions, a strong character and, to some, a charming person.

More importantly, she is a political outsider, much like Wilders and Trump were.

This is a quality that none of Denmark’s other political parties have, no matter where they are on the political spectrum.

It is a quality that appeals to voters who feel disenfranchised and ignored by the political system. A quality that may help her party get nearly 5 percent of the popular vote.

Most importantly, it is a quality that requires those wanting to thwart her political ambitions to take her seriously. Mocking her will do little good, as is clearly evident looking back at the US presidential election campaigns.

Although there are few similarities otherwise, Trump proved that being a political outsider does not mean you will not succeed, but to the contrary.

With ultra-liberal economic policies, appeals to freedom and independence, and voicing a fierce anti-Islam sentiment, Vermund sounds every bit like her peers in the US and Europe.

The Danes must make every effort not to repeat mistakes from elsewhere. They must not discount Vermund. They must take her seriously, because she is being taken seriously by those who agree with her.

Instead of jeering at her, they need to come up with effective counter-narratives.

They have to find common ground with the people they disagree with, and discover new ways of relating to each other, to understand the lives and challenges of those who have become so deeply distrustful of the perceived political elites.

If they fail, Denmark might indeed be on the path toward a true dystopia after all.