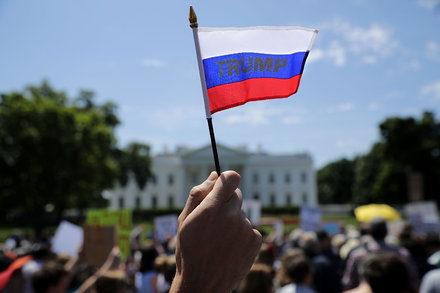 No American should have a keener sense of the dark intrigues that underpin Kremlin politics than Mikhail Rubinsteyn, who arrived from Russia almost four decades ago as Brighton Beach was morphing into Brooklyn’s bastion for refugees from the Moscow regime.

“Putin? Meddle in American politics?” Mr. Rubinsteyn asked in wonderment at his popular Brighton Beach cafe. “Absolutely not. Fake news from Democrats,” he said, echoing the all-purpose dismissal crafted by his beloved President Trump, whose émigré support remains firm in the community. Very firm, Mr. Rubinsteyn said, despite the increasing reports of Russia cyber-scheming in America before the election to help Mr. Trump.

“This is America,” he said. “To have something believed in this country, you have to prove it.” He is a refugee from a time in Moscow when democratic rights and impulses were furiously stifled by the Kremlin, much as they are now.

The puzzle in Brighton Beach is much the same as in other parts of the Trump base: Why is there no great alarm from President Trump or his supporters about the brazen Russian intrusion into American politics that has been certified by American intelligence agencies? The question is even starker when posed to old Soviet émigrés who should know better as they enjoy the well-stocked shops and flowing freedom along Brighton Beach Avenue.

“Putin was in the army,” said Vlad, a Russian Army veteran who finds that reason enough to trust Russia’s autocratic president. This, despite the Russian leader’s deep credentials with the K.G.B. and the suspicious deaths of politicians and journalists who dared to challenge his regime. “He’s controlled the situation in Russia,” said Vlad, declining to give his last name. “Putin and Trump — these guys make decisions,” he added admiringly.

This “strong man” endorsement can be heard repeatedly in the community, but there is much more complexity to Brighton Beach these days, according to Sam Kliger, a sociologist who is director of Russian Jewish community affairs for the American Jewish Committee. A refusenik who managed to flee the Soviet Union 27 years ago, Mr. Kliger notes that the community has traditionally been pro-Republican at the presidential level, so the Trump victory was expected even as it fell a bit short of Mitt Romney’s 2012 vote.

“Anything that remotely smells of Communism they hate,” Mr. Kliger said, noting how even the focus on government service proposals by Democrats can be mistrusted. Thus, partisan zealots labeled Hillary Clinton not just the familiar Trumpian “crook,” but a “socialist” as well — the hated S-word in Brighton Beach.

“A Byzantine Empire,” Mr. Kliger politely summarized, emphasizing how much Brighton Beach shifted in recent years with younger émigrés from far more regions of the former Soviet Union who arrived more freely and for many different reasons. He said many feel that contemporary Russia, whatever it has become, is not the old Soviet Union. “Some are very much afraid of Russia, while others think it should be engaged,” he said, just as there are sharp differences about how far to trust Mr. Putin.

The signs of change are clear along the boardwalk, where some early refugees, so pioneering in the Gorbachev era, now sit and stare at the ocean from perches in the Garden of Joy Adult Day Care Center.

“Listen,” Mr. Rubinsteyn said amid the buzz in his cafe. “People I know a long time from Russia, they don’t care what’s going on in Russia,” he said of forgiving and forgetting the old world. “I wish Russia the best.”