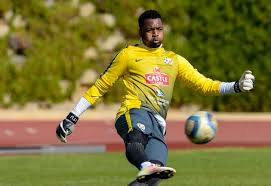 Khune has retained his place in goal after his heroics ensured that SA walked away with a point in the opening Olympic Games match against hosts Brazil.

Coach Owen da Gama has retained most of the squad that fearlessly went toe to toe with the Brazilians‚ making just two changes to the team that held the South Americans to a goalless draw.

Kwanda Mngonyama will step into the fray in the place of Mothobi Mvala‚ who was sent off in the match against Brazil.

Tebogo Moerane will come in for Menzi Masuku‚ who has been relegated to the bench.

“Denmark is a good side and it will not be an easy match at all‚” Da Gama said.

“They are very dangerous in set-pieces and building up play. We will have to ensure that we stay alert at all times and do not give away fouls in crucial positions.

“We believe we have a good chance if we play to our strengths‚ and I can tell you now all the players are eager to continue from where they left off in our last performance.”

Both South Africa and Denmark have a point each after they drew their opening clashes.