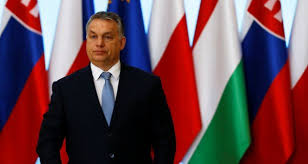 Legislation passed by Hungary’s parliament this week will confine all refugees and migrants to camps for the entire duration of the asylum process, and empowers police to detain illegal migrants caught anywhere in Hungary and expel them to neighbouring Serbia without any legal recourse. Only unaccompanied children younger than 14 years of age will be exempt.

The new system will also deter the EU from allowing the return of asylum seekers to Hungary under the bloc’s so-called Dublin regulation – an outcome Mr Orban may welcome, having portrayed Europe’s mostly Muslim migrants and refugees as a danger to its security and identity.

Nils Muznieks, the Council of Europe’s human rights commissioner, said on Wednesday that the measures were “likely to exacerbate the already highly problematic situation of asylum seekers in Hungary.

“Under the case law of the European Court of Human Rights, detention for the purpose of denying entry to a territory or for removal must be a measure of last resort . . . Automatically depriving all asylum seekers of their liberty would be in clear violation of Hungary’s obligations under the European Convention on Human Rights.”

Gauri Van Gulik, Amnesty International’s deputy director for Europe, said: “Plans to automatically detain some of the world’s most vulnerable people in shipping containers behind razor wire fences, sometimes for months on end, are beyond the pale.

“We are urging the EU to step up and show Hungary that such illegal and deeply inhumane measures have consequences.”

During the height of Europe’s refugee crisis in 2015, Hungary built fences on its southern borders to block people moving along the “Balkan route” to western Europe.

Mr Orban’s government is now building a second layer of fencing, and he has dismissed criticism of its asylum policy as “dreamy human rights gibberish”. Officials have also rejected numerous reports of Hungarian police mistreating refugees and migrants that they detain.

At a swearing-in ceremony for border police this week, Mr Orban said Hungary was still “under siege” and that the crisis would persist “until people everywhere realise that migration is the Trojan horse of terrorism”.

Mr Orban’s populist Fidesz party is also expected to introduce a bill to parliament this month that would sharply increase financial scrutiny of foreign-funded NGOs in Hungary.

The main target of the bill appears to be liberal groups financed by Hungarian-born billionaire George Soros, some of which have worked since the 1990s to strengthen democracy, transparency and the rule of law in Hungary. They now often criticise Mr Orban over everything from asylum policy to widespread corruption.

Mr Orban himself predicted that 2017 “would be about squeezing out the forces symbolised” by Mr Soros. “One can feel it coming,” he said, “that each country will trace the source of this money, the connections [between NGOs] and intelligence communities, and which NGOs represent which interests.”

“We often hear comparisons with Russia, but Russia is not an EU member and doesn’t espouse democratic values as part of its society,” Mr Buldioski told The Irish Times.