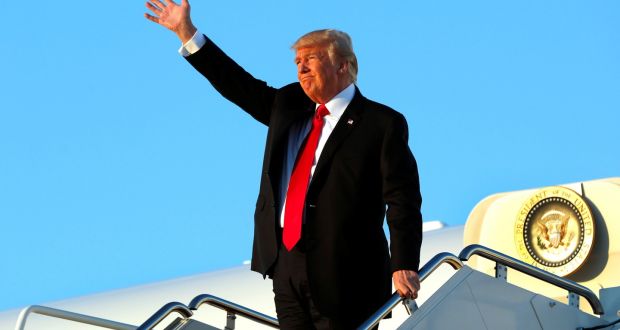 Donald Trump does not travel well. At his first major summit, he was too tired to walk through the Sicilian streets with the other G7 leaders, and took to his golf cart. He literally pushed aside the prime minister of a small European country to stand at the head of the pack. He found himself in a minority of one over the Paris climate accord, rejecting arguments that he was ceding world leadership to China. And he was irritated by all the tough-guy talk from France’s president, Emmanuel Macron, who boasted to a French newspaper that his white-knuckle handshake with Trump was “a moment of truth”.

When he returned home, Trump’s response was to embrace his isolation. “I was elected to represent the citizens of Pittsburgh, not Paris,” he declared as he pulled out of the Paris agreement, barely a month ago.

This week, Trump is preparing to travel to his second summit, the broader G20 group of world leaders in Hamburg, and the omens do not look good. The summit is hosted by Angela Merkel, the German chancellor, who was so very disappointedin Trump’s leadership last time around. Germany’s protesters are perhaps the only group looking forward to Trump’s arrival.

This is the Trump paradox, five months into his presidency: the more he tries to assert US leadership, the less of a leadership role he plays. For someone who campaigned on the promise to make America great again, the reality of government has been an exercise in looking weak again and again.

Trump is not the first president to suffer such a rapid belittling. At the same point in his first year, Bill Clinton was reduced to thumbnail size on the cover of Time magazine, after a disastrous transition and a hapless response to the horrors of ethnic cleansing in Bosnia. The Incredible Shrinking President, screamed the magazine cover.

Clinton would go on to lose Congress the following year and face never-ending investigations that led to his impeachment. Of course, he also achieved great international popularity, a healthy re-election victory and stunning economic growth.

For now, Trump shows no sign of Clinton’s adaptability. The scandals and investigations engulfing him are more profound and numerous than anything since Watergate. And yet the US economy remains healthy, the stock market is touching giddy heights, and a handful of Middle Eastern allies are dancing with joy, if not swords, at Trump’s arrival.

It is possible to measure how much Trump has made America weak again. The Pew Research Center surveyed more than 40,000 people in 37 countries this year, examining global attitudes to the US and the president since Barack Obama left office. The numbers are grim reading for anyone but Vladimir Putin.

Confidence in the US president has collapsed 42 points to just 22%, while favorable views of the country overall have dropped 15 points to 49%. The declines are staggering in European countries, and the 10 countries where US presidential favorability ratings plunged the most includes South Korea and Japan: two allies who are clearly not reassured by Trump’s belligerent tone toward North Korea. Trump starts his presidency at the low point where George W Bush ended his, after years of cowboy diplomacy and wars in Iraq and Afghanistan.

There are just two countries registering a rise in confidence since the Obama era ended: Israel and Russia. In Israel, where Obama clashed repeatedly with the Netanyahu government, confidence has risen 7 points, from 49 to 56%: hardly a tidal wave of happiness.

The only country to fully embrace Donald Trump is Mother Russia herself, where confidence has rocketed 42 points, from 11% to 53%. Given the number of Russian immigrants in Israel, the two countries may really reflect only one dynamic: the curious case of Trump’s crush on Moscow.

However, the survey does not tell the full story. Trump’s foreign policy has led to a marked shift in attitudes in Saudi Arabia and the Gulf states, where leaders made little secret of their disdain for Obama. After the ceremonial pomp and swagger of Trump’s official visit to Saudi Arabia in May, the Saudi-led Gulf coalition announced a blockade of Qatar for supporting terrorism. The blockade was welcomed by Trump, who gushed on Twitter: “Perhaps this will be the beginning of the end to the horror of terrorism.”

The president’s views were not shared by his own state and defense departments, who sent a very different set of signals to the region, no doubt concerned about the fate of the large US base in Qatar which is the hub of air operations for Syria, Iraq, Yemen and Afghanistan.

The Trump effect in the Middle East represents the kind of unpredictability that threatens to destabilize further a region already in turmoil. By improving relations with some allies, Trump has worsened relations with others. Along the way, he has jeopardized American national security interests. It seems his single-minded pursuit of individual challenges or countries does not translate to the complex politics of the Arab and Muslim world. As a result, the great self-styled dealmaker is starting to look like he got played in his first big negotiation on the world stage.

“You can argue that the leaders in the Gulf feel that they have in Trump not just an ally in the traditional sense, but actually a kindred spirit, and they can go beyond where they would have been with America as a traditional ally,” says Robin Niblett, the director of Chatham House.

“He’s almost given them a blank check by making Iran the number one enemy. China is complicated. He’s discovered that Russia is complicated. The enemy has narrowed down to one: Iran. If you’re in the Gulf states, you can let your hair down on some of their deeper grievances, which are encapsulated, in a way, by Qatar as the fifth column, the Muslim Brotherhood and Iran. This is risky at this moment when so much is up in the air across the Middle East.”

Trump’s upheaval is partly intentional. He was elected on the promise of destroying Isis, rather than downplaying its capabilities, as Obama did in its early stages. Trump wanted to project strength through the Middle East, not the weakness he perceived in his predecessor. And above all, he wanted to push and shove European allies to step up: to increase their military spending and reorient Nato towards terrorist threats.

These are not outlandish demands. In fact, they are something like the consensus view of English-speaking diplomats, at least, on both sides of the Atlantic for most of the post-9/11 period.

What is outlandish is the almost entire absence of any diplomacy in Donald Trump himself. Take the flap over Nato’s article five on collective defense: the very essence of the military alliance. At the new Nato headquarters in Brussels, he dropped a planned endorsement of article five, deeply unsettling his Nato allies.