Contrary to some interpretations of unfolding events, it isn’t possible for Ukraine to join the West while coexisting peacefully with Russia. 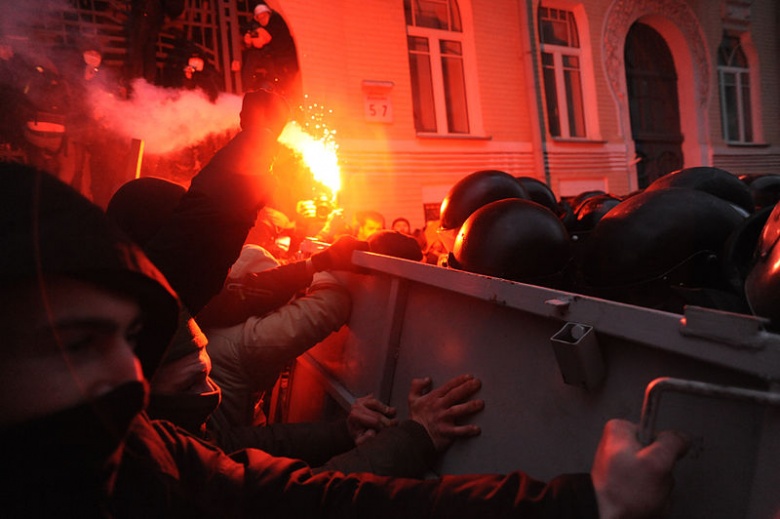 Buried near the bottom of the Wall Street Journal’s Tuesday editorial on the Ukrainian elections was this sentence: “Sunday’s vote showed that Ukrainians want to join the West while co-existing peacefully with Russia.” There are two problems with this. First, it is far from clear that this was the underlying civic sentiment expressed in the elections. Second, even if the Journal’s reading of the vote is correct, it isn’t remotely possible for Ukraine to join the West while coexisting peacefully with Russia.

If Ukraine’s electoral winner, Petro Poroshenko, is going to succeed, he must correctly dissect the vote, and the stakes posed by this challenge are immense. As the Journal notes, the “chance for civil war is real,” and avoidance of such bloodshed will require a delicate balancing act and an uncommon deftness in knitting disparate political sentiments, passions and interests into a governing coalition. If he takes the Journal’s position—that the election settled with finality the question of Ukraine’s tragic dual identity—he almost inevitably will unleash that civil war.

As I have emphasized in these spaces over the past several months, Ukraine is what the late Samuel Huntington called a “cleft country”, split between a European-oriented, nationalist region in the west and a Russian-oriented, largely Orthodox-influenced region in the east. Since Ukraine’s independence at the end of the Cold War, no Ukrainian politician has been able to bridge the gap between these two regions and these two cultural sensibilities. Electoral results over the years have reflected this dual identity—and also reflected the consequent inability of any population segment to impose, through politics, its cultural identity upon the nation as a whole.

It isn’t clear, based on the information now readily at hand, just what the vote totals demonstrate as to what the nation is looking for in its national leadership. Certainly, though, it would seem unrealistic to assume that one election suddenly erased the political sentiment of Ukraine’s eastern regions, which has been amply demonstrated in numerous previous elections and abundant opinion polling. Surveys in eastern Ukraine indicated that, while the majority there didn’t wish to be pulled into the Russian Federation, as Crimea was, it did wish to maintain its cultural and economic ties with Russia and had no desire to antagonize the big neighbor to the east.

Thus, Sunday’s vote totals more likely reflected a political fear, in both regions, that a disruptive civil war was too close for comfort and that Poroshenko was viewed as the country’s last best hope for a conciliatory solution.

A billionaire candy magnate with an extensive political background and talent for political ambiguity, Poroshenko now faces the challenge of bridging the regional gap, and he appears to be as well-equipped as anybody to pull it off. But he won’t succeed if he takes his cues from Western governmental bureaucrats and commentators who see the Ukrainian drama as a stark morality play in which the good guys are the nationalists of the west and the bad guys are the Russian-speaking and Russian-oriented people of the east.

He will do well to steer clear of such thinking and concentrate on the key challenges and problems of his country—fixing Ukraine’s devastated economy through whatever alliances can best further that aim; combating the civic corruption that has plagued the country for years, irrespective of which side captured the presidency; establishing governmental legitimacy in the wake of a street coup that upended a duly elected government; and—most important—crafting a governing model to somehow accommodate the passions of both west and east. The latter likely will require some concept of autonomy that protects eastern peoples from cultural hegemony from the west while also protecting the west from undue Russian interference.

All of this will have to be pursued with an understanding that no Ukrainian leader will be able to wrest Ukraine from Russia’s strategic sphere of influence, where the country has resided for the past 350 years. That’s because no Russian leader will allow any such turn of events to unfold. Major regional powers don’t accept severe blows to their strategic positions in their own neighborhoods without employing all means necessary to prevent them. Russia is no exception.

The United States is no exception, either, as attested by its audacious resolve, from the Monroe Doctrine onward, to exercise complete control over its own broad geopolitical environment. It went to war to cement its annexation of Texas and wrest from Mexico vast territories seen as crucial to its strategic position on the North American continent. It contemplated a war with France to remove a Mexican “emperor” installed by the French during the Civil War. It entered a war with Spain in 1898 to kick that waning empire out of the Caribbean and thus, gain strategic dominance over that body of nearby water—and also the northern entrance of the coming Panama Canal. It engaged in all kinds of questionable Cold War behavior—including assassination missions—born of its irritation that a communist-aligned leader should hold sway in nearby Cuba. It braved prospects of a nuclear exchange with the Soviet Union in order to remove nuclear missiles from that contested island. It pushed its weight around throughout its hemisphere for decades to protect its perceived strategic and economic interests.

Many of these activities have been criticized and even vilified by people both inside and outside the United States over the decades, but in fact, they are the natural actions of a nation bent on protecting its security in its near abroad. All nations do this to the extent of their capability.

The question faced by America and the West is whether Russia’s resolve to do this in next-door Ukraine represents any kind of intrinsic threat to American or Western interests. The answer is no. Ukraine has served as a useful buffer territory between these two civilizational entities for centuries, with Russian influence generally holding sway, and there is no reason why the West should seek to upend this natural state of things. In fact, efforts to do so represent a level of aggressiveness that no Russian leader will tolerate.

That is the fundamental reality of the situation, and irrespective of whether America and Europe come to accept it, Poroshenko can’t ignore it without putting his leadership and his country at risk. If he seeks to yank Ukraine away from the Russian sphere of influence and place the entirety of the country under the Western sphere, particularly if that enhances prospects for NATO membership, he will drive a wedge through his country and probably bring Russian intervention. That’s why, contrary to the Journal’s interpretation of unfolding events, it isn’t possible for Ukraine to join the West while coexisting peacefully with Russia.

Even if Poroshenko understands and accepts this reality, his tenure will be fraught with danger and will require extremely creative and adroit leadership. If he doesn’t, the tragedy of Ukraine will become all the more ominous.