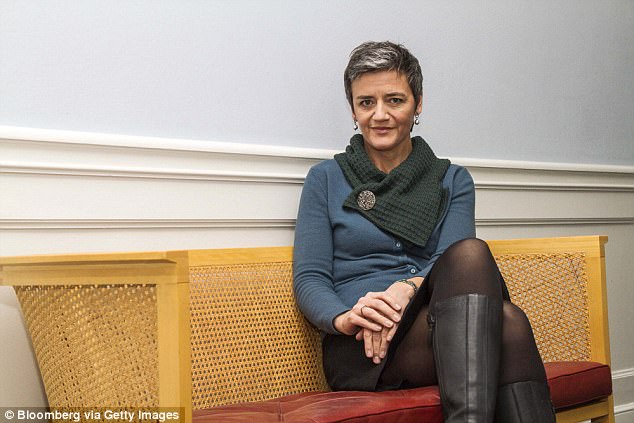 Her tough stance and sharp wit have made Margrethe Vestager one of the hardest negotiators in the EU.

She is also the inspiration behind Birgitte Nyborg, the politician in hit television drama Borgen.

Nyborg is a feminist leader of a centrist party who finds herself becoming Danish prime minister.

With the economy suffering after the financial crisis, she pushed through tough austerity measures, famously responding to accusations of callousness by saying simply: ‘That’s the way it is.’

Her ascent to political fame is a far cry from her modest upbringing as the daughter of two Lutheran rectors in the small Danish town of Olgod.

Signs of her ambition appeared early however after she followed in her father’s footsteps by joining the Social Liberal Party, which was founded by her great-grandfather. She unsuccessfully stood as an MP at only 21.

Despite the initial setback, she rejoined the world of politics after graduating in economics from the University of Copenhagen in 1993, beginning a rapid ascent up Denmark’s political ladder.

Miss Vestager, who has three daughters, worked toward power after her party entered into a coalition, winning just 17 out of 179 seats in the 2011 election.

Known for her sharp wit, she was dubbed ‘Sultry Vestager’ after shooting down a rival’s critique of her budget plans by saying she did not trust ‘judgements on size from men’.

She has amazed colleagues with her work ethic since arriving in Brussels – often going on early-morning runs and baking before arriving at her office.

While not running her 900-strong competition team, Miss Vestager says she enjoys everything from high-end art to action films such as Die Hard and James Bond. Her husband is a maths teacher.

Idolised by staff, she is motivated by what she claims is a desire for fairness and to protect Europe’s single market.

She denies claims that the bloc is unfairly targeting US companies.