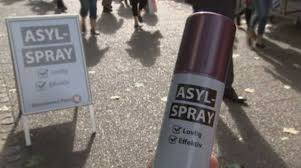 A provocative stunt by a far-right Danish political party this week has stirred a growing international backlash.

Members of the Party of the Danes in the port town of Haderslev distributed dozens of aerosol spray cans to passersby. They were labeled “anti-migrant spray,” aimed at equipping local Danes against the threat of assault from immigrants and asylum seekers.

The purse-size can came with a label that translates as “Refugee Spray,” both “legal” and “effective.” The move immediately drew critics.

Izza Leghtas, a senior advocate for Europe at Refugees International, described the gag to CNN as “an appalling act of hostility and xenophobia towards asylum-seekers and refugees.” She went on: “People who have fled to Europe to escape from war and violence should find the protection they need, and be treated with respect like any other human being. Yet too often, they find closed doors and prejudice. This is the latest, extreme example of that.”

The Party of the Danes defended its stunt in Haderslev. “I cannot see how it is racist,” party leader Daniel Carlsen told CNN. “Pepper spray is illegal here so we wanted to figure out a way for Danish people, in particular women, to protect themselves. It’s obviously not the ideal situation.”

While the party is relatively fringe and linked with neo-Nazism, its fellow travelers include more prominent, legitimate organizations, such as the Danish People’s Party. From obscurity in the 1990s, the xenophobic DPP has risen to command a significant chunk of seats in Denmark’s Parliament, winning some 21 percent of the vote in elections last year. Denmark’s coalition government has been accused of taking a hard line on migrants, and was widely criticized for a plan to seize the assets and valuables of incoming refugees.

Like the attitudes of far-right populists elsewhere, security fears in Denmark about an influx of migrants are often built on a more abhorrent reservoir of racial hostility. This summer members of the Party of the Danes circulated a meme online ahead of the European soccer semifinal between France and Iceland. The image showed France’s many non-white players juxtaposed against the Icelanders, hailing a clash between Africa and Europe.

The solidarity, as you can see in the tweet above, did not impress Icelanders.

This is not the first time xenophobic groups have distributed sprays to combat immigrants. In January, Geert Wilders, the Dutch far-right leader, walked around a fish market in Rotterdam, handing women spray cans that promised to be “Islamic testosterone bombs.” The stunt followed right-wing furor in parts of Europe after migrants and asylum seekers were implicated in a series of sexual assaults in major cities.

Charlotte Bech, a resident of Haderslev, wrote a blog for the Agence France-Presse website decrying the divisive politics that have overtaken her town and describing her own experience when handed one of these anti-migrant sprays.

“I asked him what it was and he responded, very seriously, that it was an anti-migrant spray,” she wrote. “I was shocked. I felt a deep sense of injustice. I have gotten to know several refugees who are living in my town and some of them have become friends. I can’t stand people judging them in that way.”

She added a note of optimism: “But it is important to point out that a lot of Danes have taken to social media to denounce these sprays. Two people even filmed themselves handing out aerosol sprays meant to promote compassion towards migrants.”