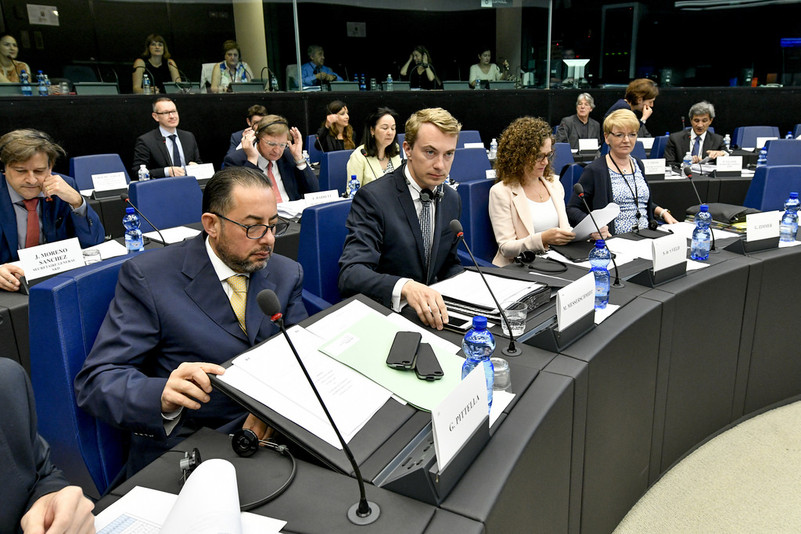 It was a tough assignment – to write an article disclosing political party conventions, falsely pretending to be climate conferences that were illegally paid for with EU money.

It exposed that invoices for hundreds of thousands of euros were issued by the party’s friends and that the Polish minister of justice appeared to be at the heart of a fraud perpetrated against the European Parliament (EP).

A Danish journalist, Peter Jeppesen, and I published our stories on the same day, on 15 November. I published my part in the Polish weekly Newsweek Poland and he did it in the Danish newspaper Ekstra Bladet.

We were confident in our material, which contained witness statements, recorded interviews, and documents. It was one of those strong stories that journalism students dreamt of.

Who would have thought that such a splash – involving a government minister – could simply be ignored in Poland?

What prompted the collaboration between a Danish and a Polish journalist in the first place?

The answer to that question is the history of Meld – the Movement for a Europe of Liberties and Democracy.

Meld was an EU-level party founded in 2011. Populist MEPs from Denmark, Lithuania, and Poland, among other states used it to support the work of the Eurosceptic right in the EU assembly.

She began asking questions after having been named as a Meld board member without her knowledge.

When Messerschmidt refused to grant her access to Meld’s accounts, she resigned from the party in protest in the first scene of what became a political drama in Denmark.

In Denmark, Meld had instead used hundreds of thousands of euros obtained from the EP to work on the campaign of the right-wing populist Danish People’s Party.

I got information that fictional symposiums may also have taken place in Poland.

The information concerned Solidarna Polska – a minor, right-wing party that is currently in a coalition with the ruling Law and Justice (PiS) party.

In one example, Newsweek Poland found a document confirming that Meld had paid for a climate conference for 800 people to be organised in Poland. The document said it took place in Krakow on 30 June 2013.

There was just one problem: No such event took place in Krakow on that day.

Instead, the largest room of the Kiev cinema in the city served as a venue for a Solidarna Polska party convention held under the slogan “A new state, a new constitution”.

It brought together 1,200 party sympathisers in a US-type rally with flags and banners. The party leader’s fiery speech did not say one word on climate change.

The Polish politicians involved in the case were all linked to PiS, which came to power in autumn 2015.

For a few years, Meld’s Brussels faction was led by Jacek Wlosowicz, a former Solidarna Polska treasurer who is now a PiS senator.

Wlosowicz was also the right-hand man of Zbigniew Ziobro, the head of Solidarna Polska, who now serves as Poland’s minister of justice.

Jacek Kurski, another character in our story, is now president of Polish public broadcaster TVP.

On top of the bogus climate conference in Krakow, other Meld funds were transferred to its friends in Poland, who then sent substantial donations to Ziobro’s party.

Some suspect donations appeared to have been funnelled by relatives prior to Poland’s 2015 election.

Ziobro family members donated 437,000 Polish zloty (€98,000) to his party. One of Wlosowicz’s elderly relatives, who lived modestly in a block of flats in a poor district in the Polish town of Kielce, also made donations. Jacek Kurski, a former Solidarna Polska MEP, received three transfers, totalling 42,000 zloty, from his 20-year old daughter the week before the Polish vote.

Newsweek Poland asked if it was possible that the politicians’ co-workers, friends, and family were sending money that was not theirs?

We never got an answer.

Accusing a minister of being involved in obscure financial scams – that is serious stuff.

In any case, it was taken seriously in Denmark, where Jeppesen’s text in Ekstra Bladet, including on the Polish thread in the Meld affair, had an impact and was widely quoted in newspapers and on TV.

In Poland, we do things differently.

When Newsweek Poland published its online edition on Sunday evening, the day before the print edition, Wlosowicz threatened to sue us and to sue other Polish media if they quoted the article.

The main Polish online news providers did not dare to cite or follow up on our story, those who did, withdraw.

Wlosowicz, who was president of Meld until its closure, also denied any link to the Danish case. He said in a statement that the EU’s anti-fraud office, Olaf, “has challenged only [Messerschmidt’s] expenditure … and this at a time when politicians [from] Solidarna Polska no longer belonged to the Meld”.

Wlosowicz is a small fish.

We’ve been waiting for days for Ziobro, Poland’s minister of justice, and Kurski, the TVP chief, to reply to the Newsweek Poland revelations.

We’re not holding our breaths for their answer.

The reason the reaction to the story in Poland was total silence probably has more to do with the political climate change than with the fictional climate conference in Krakow. The Polish political atmosphere had changed since the 2015 elections.

In today’s Poland, a journalist can publish a story showing that government members stole money from the European Parliament, but that does not mean that anybody will be held accountable.

The Bureau of the European Parliament decided in May 2016 that the ‘European party’ MELD and the affiliated fund FELD had misused funds for €400.000, which should be recovered. In Denmark, the Danish MEP involved in the affair, Messerschmidt, subsequently agreed to repay €134.000 of EU funds.

In Poland, three days after our publication, Ziobro held a press conference in which he said: “Me and my deputies, both in the ministry of justice as well as the prosecutor’s office, are guided by the principle: the state has to protect the honest and be ruthless against those who break the law.”

When we asked him about the Meld affair, he declined to answer. He blushed a bit, then smiled for a while, before abruptly leaving the press conference.

How can the same story be a scandal in Denmark and nothing in Poland? How can the minister of justice, who is facing allegations of fraud, just walk away from questions?

I’ve struggled to answer these questions.

Perhaps the European Union for Poles is still a distant thing, something that they and their politicians treat like a piggy bank, a source of easy grants, rather than as a club with rules and values.

Poland, since the 2015 elections, has come to resemble the Hungary of prime minister Viktor Orban, where party-loyal media do not ask hard questions and where ministers also feel immune from scrutiny.

Maybe what we are living in is a golden age of populism.

Nobody in Poland believes that Olaf will lift the lid on this case, but unless the EU imposes some checks and balances from the outside, politicians like Ziobro will be able to keep on laughing.

I believe that Ziobro’s statement – that the state has to protect the honest and be ruthless against those who break the law – will, one day, come to be the case in Poland, despite him.

This is not just about how politicians handle bad PR. It is about living in the liberal, democratic Europe that we all signed up to.