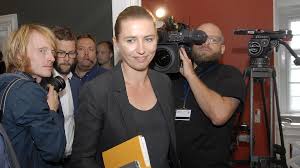 When Denmark’s leading centre-left politician made overtures to the country’s anti immigrant populist party earlier this year, it created ripples that were felt across Europe. In a highly symbolic move, Mette Frederiksen, leader of Denmark’s centre-left Social Democrats, gave a joint newspaper interview with the head of the Danish People’s Party. Under Ms Frederiksen, who became party leader following their election defeat in 2015, the Social Democrats have supported DPP policies including a call for a ban on prayer rooms in universities and schools. The two parties have united to block a government-backed reform to lift the pension age and have even refused to rule out the possibility of a future coalition. For Ms Frederiksen, these closer relations form part of an attempt to answer a Europe-wide question: how can the centre-left survive in a time of populist politicians? With electoral near-wipeouts in France and the Netherlands, there have been few reasons for the centre-left to cheer. In the Nordic countries that are seen as a bastion for liberal social values, for the first time since the second world war the Social Democrats are in power in just one country — Sweden.  “When I started in politics, 13 out of 15 EU leaders were Social Democrats. You compare the situation today with that period and you really have to admit that we are challenged. It’s hard times,” she tells the Financial Times.  Ms Frederiksen’s solution is likely to be studied across the continent by centre-left parties seeking to stem a seemingly inexorable decline. So far, her approach is having some success. Denmark’s minority three-party rightwing government is loosely backed by the DPP. But the opposition Social Democrats have consistently polled as the largest party by about 5-10 percentage points in recent surveys. This strategy could yet backfire if its approach to immigration alienates its normal leftwing coalition partners.
But Ms Frederiksen, 39, argues that she is not pro- or anti-immigration but merely seeking to be realistic in a country with a big welfare state.  Denmark has received fewer immigrants than neighbouring Sweden but has long been more sceptical about the benefits. The 2015 migration crisis led to tougher measures — including the infamous but almost never-used jewellery law, which allowed police to seize immigrants’ jewellery to pay for their stay. These measures were also backed by the new leadership of the Social Democrats. “When you enter Sweden, Norway or Denmark you have the right to almost everything from day one . . . It’s a difficult system to combine with a lot of people coming. Otherwise our system isn’t going to stick together,” she says.  Peter Nedergaard, a professor of political science at the University of Copenhagen, says this scepticism is merely a return to Social Democratic roots. He argues that until the beginning of the 1980s many centre-left parties viewed immigration simply as a source of cheap labour.  “I think we will see a shift in the next three or four years in the Nordics to a more restrictive view. This is also the only chance for the German Social Democrats to gain power again,” Prof Nedergaard says.  Even in Sweden, the ruling Social Democrats introduced border controls in 2015 to reverse what were then record numbers of asylum seekers. But a senior Swedish Social Democrat balks at any comparison with their Danish counterparts. “Their recent course is quite worrying,” he says, referring to the joint interview with the Danish People’s Party. The thought of co-operating with the Sweden Democrats, a party with its roots in the neo-Nazi movement, is anathema to him. But in Denmark the idea of co-operating across political lines has a much longer history and the Danish People’s Party has already hugely influenced the immigration debate. Ms Frederiksen argues that too many centre-left parties have turned their back on certain voters. Making “the bridge” between the cosmopolitan elites and the often rural discontents is vital, she says.  “It’s quite obvious that if the Social Democrats aren’t able to connect to those who are most challenged by the future or the way our society is developing then we are not a real Social Democrat party. I feel sad when I see poor, unemployed people in the US voting for Trump. They are voting for him because they could not find a voice for them in the Democratic party. I need to avoid that in Denmark,” she says.  Ms Frederiksen says her priority is to rebuild the social contract in Denmark. That means: “Fight inequality, make sure you don’t receive more people from elsewhere than you are able to deal with, handle globalisation.”  In many ways, that brings her party close to the Danish People’s Party, which is unusual for a populist party in having a centre-left economic policy favouring the welfare state.  Prof Nedergaard says that a narrowing of differences poses “both a chance and a risk” for the populists. It might allow them to increase their influence, particularly on immigration. “On the other hand, it becomes a risk because . . . if you can get all these policies from other parties then why vote [for the] Danish People’s Party?”  Ms Frederiksen is loath to comment on whether Denmark can be an example for the European centre-left but she is clear on where things have gone wrong. “What I think is the most important thing about being a Social Democrat party is actually being relevant. Are you able to find the answers to the problems that people are facing?”