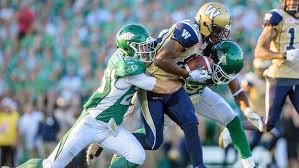 Clarence Denmark is getting a second chance to rewrite the ending.

After the Winnipeg Blue Bombers were hit by a rash of injuries in their receiving corps, Denmark has officially rejoined the CFL team and has an opportunity to add another chapter to a book that looked like it was closed back in March when he was released for salary-cap reasons.

Denmark, who spent the past five seasons with the Blue Bombers (2-4), was added to the practice roster on Sunday and is expected to be activated in time for

Wednesday’s game against the Hamilton Tiger-Cats (3-2).

Blue Bombers over the past five seasons. “I knew that I still wanted to play, so I was going to be ready just in case an opportunity (came). When the opportunity is taken away, you’re hungry for another shot. I was being positive and staying ready.

“This is the best outcome I could have, the best situation I could be in. I never thought that I would get it, but this is what I wanted.”

In an odd twist of fate, Denmark was signed by the Saskatchewan Roughriders but was unable to nail down a spot on the roster and was released at the end of training camp.

With Dressler and Smith sidelined, Denmark is back where he never wanted to leave in the first place.

And in case you were wondering, Denmark has no hard feelings about the way things went down in late March and didn’t hesitate when asked to come back.

“Absolutely I was interested,” said Denmark. “Winnipeg is my team, regardless of what happens. I played here five years and it’s always going to be my team.”

That doesn’t mean that being sent packing wasn’t difficult at the time.

“Winnipeg is all I know, so it was tough,” said Denmark. “It hurt. You want to be here. I saw where the team was going and I wanted to be here. It’s a business at the end of the day. Of all people, I know that. I’ve been on the good side of it for a while. The bad side comes, so you’ve got to deal with it.”

Denmark was working with the first-team offence on Sunday and says his legs are fresh and ready to go this week.

“I’m confident,” said Denmark. “You say you’re ready but you never know until you get out there and run around.”

Paul LaPolice – who was the head coach when Denmark first arrived on the CFL scene.

“The terminology is a little different, but you’ve got to study hard,” said Denmark. “Everybody welcomed me in and it just felt like home. That’s a good feeling.”

Blue Bombers head coach Mike O’Shea is excited to have Denmark back, noting this reunion isn’t expected to have any awkward moments after the divorce.

“He’s a good receiver,” said O’Shea. “We never had a problem with Clarence in terms of his ability. Some of these decisions are just purely business decisions. He’s familiar with the offence and we’re familiar with him. A couple of years ago, he was second in the league in receiving. He’s a guy who can get it done.”

Denmark is also known for his professionalism and that will come in handy as the Blue Bombers try and implement the next-man up strategy with several other guys that have limited CFL experience.

Being a good teammate is important, but if Denmark can be as productive as he’s been in the past, the Blue Bombers will have no choice but to keep him around – even when the receiving corps is back to full strength.

“Just being a pro and do anything I can to help the team,” said Denmark. “I’m here to play a role. Whatever they need me to do, I’ll be ready. I just want to come in and make plays.”

It’s time for Denmark to put pen to paper, rework that final chapter and possibly go out on his own terms.

Whether it’s a happy ending or another heartbreaker remains to be seen.