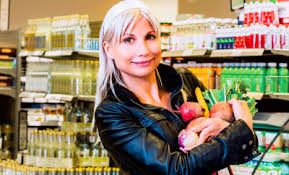 Never underestimate the power of one dedicated individual.

A woman has been credited by the Danish Government for single-handedly helping the country reduce its food waste by 25 per cent in just five years.

Selina Juul, who moved from Russian to Denmark when she was 13 years old, was shocked by the amount of food available and wasted at supermarkets.

She told the BBC: “I come from a country where there were food shortages, we had the collapse of infrastructure, communism collapsed, we were not sure we could get food on the table”.

Her organisation, Stop Spild Af Mad – which translates as Stop Wasting Food – made all the difference and is recognised as one of the key drivers behind the government’s focus to tackle food waste.

“She was this crazy Russian woman that walked in the door, with a crazy idea about stop wasting food and she has come really far since,” Maria Noel, communication officer of Dagrofa, a Danish retail company, told the BBC.

“She basically changed the entire mentality in Danemark,” she added.

Max Skov Hanser, a grocer at Rema 1000, said the retailer wasted about 80 to 100 bananas every day. However, after the supermarket  put  up a sign saying “take me I’m single”, it reduced the waste on bananas by 90 per cent.

In the past five years Denmark has become one of the leading European countries in the fight against food waste.

Last year, a charity in Copenhagen opened Denmark’s first ever food surplus supermarket, which sells products at prices 30 to 50 per cent cheaper than usual retailers.

Wefood is hoping to help reduce the 700,000 tonnes of food waste Denmark produces every year.

In the UK, household food waste increased to 7.3 million tonnes in 2015, leading to accusations the Government is failing in its ambition to bring down waste in Britain.