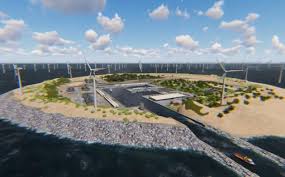 Three western European countries have revealed plans to build a giant artificial island in the middle of the North Sea where wind farms would create power for 80 million people.

The sandbank Dogger Bank, 100 kilometres off the east coast of England, is the mooted location for the groundbreaking ‘power island’ which would have its own runway and harbour.

The North Sea area has a relatively low altitude and receives a high amount of wind, making it the ideal location for the green power hub, according to transmission system operators Energinet.dk in Denmark and TenneT in Germany and the Netherlands.

The power transmission companies are expected to sign a contract on the 23rd of March to enter a mutual feasibility study of the project.

Another advantage of creating the island will be a reduction in transport costs of materials for building the wind power plants in comparison with other offshore wind farms.

The island would be around six square kilometres in size and surrounded by thousands of windmills.

Jesper Nørskov Rasmussen of Energinet.dk’s communications department told The Local that the creation of an artificial island for this purpose was “innovation”, but that the concept was not entirely new.

“It would fundamentally be an island of stone and sand with a range of electrical and other installations – a runway, harbour, accommodation, materials and so on. There are already artificial islands [in Denmark] in connection with the Great Belt and Øresund bridges, and also others abroad that are inhabited,” Rasmussen wrote in an email, adding that the next few years would be spent on a thorough assessment of details such as budgeting, technology, and securing the necessary permits to build the island.

Wind farms in countries around the North Sea would be connected to the island power hub, allowing the distribution of energy to consumers across the region, including in Denmark, Norway, the Netherlands and the UK.

Energinet.dk said in a statement on its website that the aim of the project was to make wind power cheaper.

“Maybe it sounds a bit crazy and science fiction-like, but an island on Dogger Bank could make the wind power of the future a lot cheaper and more effective,” Torben Glar Nielsen, technical director with the company, said in the company’s Danish press release.

According to the statement by the company, the primary aim in creating the power island will be to establish a hub that can collect 30 gigawatts (GW) of power.

The long term aim will be to create 70-100 GW of power through windmills connected to the island.

The peak electricity load in Denmark alone currently stands at 6.1 GW, according to the Energinet.dk press release.

70 GW will be enough to provide 80 million Europeans with power, according to Energinet.dk – around 16 times the population of Denmark.

The cooperation between the three companies is also a step towards fulfilling the goals of the Paris COP21 climate agreement, says Energinet.dk.