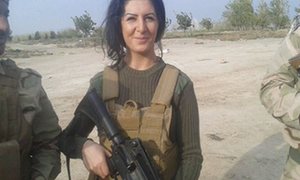 A Danish woman who fought for the Kurds in Iraq and Syria against Islamic State has been taken into custody in Copenhagen, prompting accusations of hypocrisy over her treatment compared with returning Isis fighters.

Joanna Palani, 23, who fought with both the Kurdish peshmerga in Iraq and the YPG militia in Syria, faces a potential jail sentence.

A 12-month travel ban was imposed on her to prevent her from travelling back to the conflict in September 2015, but in a closed court hearing last week she admitted travelling as far as Doha, Qatar, on 6 June this year and was taken into custody. She has another hearing on Tuesday.

Her lawyer, Erbil Kaya, noted the irony of seeking to prosecute someone who fought on the same side as Danish troops and other coalition forces while the government seeks to rehabilitate returning Isis fighters.

Palani is the first foreign fighter to be jailed under new passport laws and is currently being held in Denmark’s largest prison, Vestre Fængsel in Copenhagen.

The judge agreed to a prosecution request for more time to prepare their case, Kaya said. Time spent in pre-trial detention will be taken off her final sentence, which could be as long as two years, according to Kaya, who is forbidden from reporting the details of the case.

Returning Isis fighters have benefited from the so-called Aarhus model of reintegration and de-radicalization instead of custodial sentences. Under the Aarhus model, returning fighters are assigned mentors, psychological counselling and are helped to apply for jobs or to resume education.

The passport laws Palani is accused of breaching are part of a number of measures taken by Denmark to attempt to stem the flow of fighters to the Middle East. The country is second only to Belgium in the number of jihadi fighters per head of population in Europe. The law aims to prevent individuals travelling when a journey may involve issues such as national security or “a substantial threat to public order”.

Palani, who has been outspoken in her support for the Kurdish groups she has fought for, is believed to be one of 11 Danes to have restrictions imposed upon them.

Palani is the daughter of Iranian Kurdsand was born in a refugee camp in Ramadi, Iraq, in 1993. The family immigrated to Denmark when she was three and she was a student when the Syrian conflict first began. She went to Kurdistan, she says, “to fight for women’s rights, for democracy – for the European values I learned as a Danish girl”.

The Danish security and intelligence service (PET) is reported to have estimated that at least 125 Danes have joined the Syrian conflict, mainly to fight for Isis. Of these, around 62 are believed to have returned to Denmark, which leaves the country with one of the highest rates of returnees in Europe.

As a high-profile Kurdish fighter Palani has become a high-value target for Isis sympathizers, and is subject to vicious trolling as well as online and offline threats. Speaking just before her hearing, Palani criticized the contrast between how she was being treated and how returning Isis fighters were being treated.

“It’s very difficult for me, as there many people who are against me still in Copenhagen – some IS people. It’s hard for me to get a job as PET have been calling employers telling them I am a threat to national security, so it doesn’t seem like anyone is on my side.”

Palani has described fighting with Special Forces operatives inside Syria. Both the Iraqi Kurdish peshmerga and the Syrian YPJ, the women’s battalion of the YPG that Palani is most associated with, are being supported by international coalition forces, including Danish forces.

The YPG, a dominant partner in the Syrian Democratic Forces (SDF) currently leading the push towards Raqqa are, however, considered a terrorist group by Turkey. Both the the YPG and the YPJ are linked to the Kurdistan Workers’ Party (PKK), which is officially designated as a terrorist organization in Europe and the US.

The YPJ played a central role in the battle for Kobani, and Palani recalled the two weeks she spent there at the very start of the Isis offensive in 2014 as “the longest of my life”. She described enduring starvation-like conditions as the city was besieged by Isis fighters and supplies were cut, and said she lost “many friends” before being sent away from the front due to injury.

Speaking on her way to her detention she said she would try to plead her case on behalf of those who died fighting Isis. “The YPJ are not terrorists – we are fighting terrorists. To say we are not part of the coalition fighting against Isis is an insult to every YPJ woman who died in Kobani doing exactly that.”