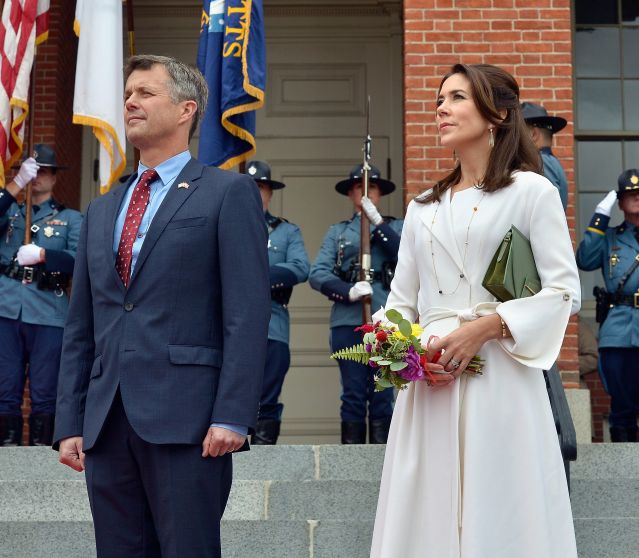 “We are bound together, I believe, by very strong and warm relationships,” Baker said at a Statehouse luncheon in honor of the royal couple. “Our educational institutions, our research base and our innovation economy have much to offer one another.”

Baker, with his wife Lauren Baker and Lt. Gov. Karyn Polito, greeted the royal couple on a red carpet on the front steps of the Statehouse. After the playing of the Danish and U.S. national anthems, the dignitaries walked through the front doors of the Statehouse, which open only for special occasions, including visits by heads of state.

Inside the governor’s office, they held a ceremonial gift exchange.

Baker gave Frederik a gurgling cod water pitcher, a gift representing Massachusetts’ fishing industry that Baker gives to all visiting heads of state. He gave Mary a Nantucket basket. In return, the royal couple gave Baker a signed picture of themselves.

Crown Prince Frederik, 48, whose full name is Frederik Andre Henrik Christian, is in line to succeed to the throne in Denmark. He married the crown princess, Mary Elizabeth Donaldson, in 2004.

Earlier Friday, Frederik attended a breakfast hosted by DONG Energy Wind Power with Massachusetts and Danish officials at the Intercontinental Hotel in Boston. DONG Energy is Denmark’s largest energy company, and it is bidding to build an offshore wind farm off the coast of Massachusetts.

The Massachusetts Legislature this session, with strong support from Baker, passed a major energy bill requiring Massachusetts to solicit long-term contracts for offshore wind power and hydropower. Denmark is a leader in the use of wind power, and Baker said he doubts the legislation would have succeeded had it not been for conversations state officials had with people in the Danish wind power industry.

“There’s nothing like having a chance to talk to people who have actually been living with the technology,” Baker said.

The royal couple is leading a delegation of Danish health care, agriculture, sustainability and maritime companies.

Poulsen said he hopes Denmark can illustrate to Massachusetts that it is possible “to have green growth,” economic growth that is environmentally friendly.

On Thursday, the Associated Press reported that Frederik was scheduled to attend an event at Boston University highlighting ways to promote urban sustainability and climate resilience, followed by a dinner with Boston Mayor Marty Walsh.