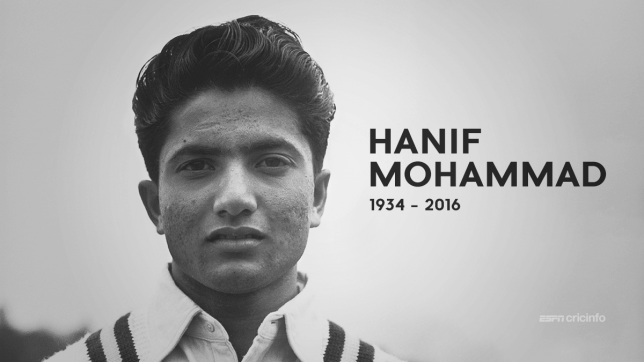 Pakistan cricket legend and former captain Hanif Mohammed has died after protracted illness at a hospital in the southern city of Karachi.

Hanif, 81, had been battling lung cancer for more than two years and was admitted at a private hospital in Karachi three weeks ago, according to reports in local media, where he breathed his last on Thursday afternoon.

Hanif made his international debut in 1952 against India and scored 51 in his maiden innings. He went on to play 54 more Tests for his country.

Hanif is best remembered for his record-breaking innings of 337 against the West Indies in 1958. He batted for 970 minutes, which is a record for the longest innings in Test cricket, saving Pakistan from a certain defeat.

He also held the record for the highest score in first-class cricket at 499 runs for 36 years before former West Indies captain Brian Lara scored 501 for English county side Warwickshire.

“His knowledge and reading of the game was unmatched. Hanif began playing for Pakistan soon after the country’s birth in 1947 so he was one of the first superstars of the country. His knack of playing long innings and scoring a lot of runs made him a hero for many.”

Hanif, with the original title of “little master” due to his short height, was 5ft 6in tall. He came from a family of cricketers. Three of his four brothers – Wazir, Mushtaq and Nazar – all played Test cricket for Pakistan.

His son Shoaib also represented the country in 45 Test matches, while his grandson Shehzar is a first-class cricketer.

Apart from being a master batsman, Hanif was an able wicketkeeper and off-break bowler.

Mourning the loss of his hero, former off-spinner Tauseef Ahmed said “a great era of Pakistan cricket has come to an end” with Hanif’s passing.

ICC Chief Executive David Richardson said in a statement: “Hanif took batting to great heights and many batsmen drew inspiration from him.”

He was the first Pakistani inductee to the ICC Hall of Fame.

“Hanif’s contribution to the game has been enormous and one can only imagine the kind of impact his batting had on others over the years,” added Richardson.

Following his retirement from the game, Hanif continued to mentor young cricketers in his role as a sports selector and administrator with Pakistan’s national carrier PIA in domestic cricket.

He was known for having an eye for talent and was responsible for picking Abbas, who would go on to become a star batsman – nicknamed Asian Bradman – and captain for Pakistan.

“Hanif selected players from all over Pakistan and he knew which batsman would be best suited for what type of pitches or batting position,” Abbas added before ruing the lack of opportunities young cricketers were given to learn from the legendary batsman before his terminal illness.

“I wish Pakistan cricket had learned more from him during his lifetime. We were lucky to have such a cricketing mind amongst us.”