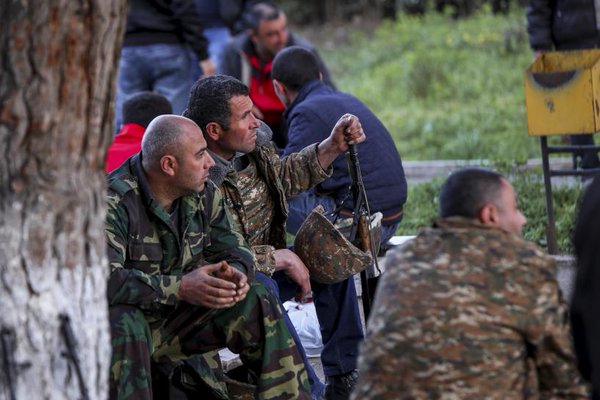 Azerbaijani forces have wrestled key locations from Armenian separatists in the contested region, the defense ministry said. Germany’s foreign minister warned that the situation is still “fragile” despite a ceasefire.

Following days of renewed violence in the Nagorno-Karabakh region between Armenian separatist forces and Azerbaijani troops, a ceasefire agreed on Tuesday was observed on Wednesday with reports of few violations.

A day-old truce between Armenian and Azerbaijani forces has largely held in Nagorno-Karabakh as world powers scramble for a diplomatic solution. There is concern the conflict could exacerbate regional tensions.

“The ceasefire was largely observed overnight along the Karabkh front-line,” said the Yerevan-backed separatist defense ministry in the contested region. The Azerbaijani defense ministry said it was “strictly abiding by the ceasefire agreement” despite isolated firing from the Armenian side.

At least 75 people have been killed since fighting erupted on Friday, marking the worst flare-up in the frozen conflict since the early 1990s, when the region was captured from Azerbaijan by local ethnic Armenians.

Baku claimed to have wrested control of parts of the contested region from Armenia, which may signal changes to the frontline for the first time since 1994.

“Azerbaijani troops are currently reinforcing the liberated territories,” the Azerbaijani defense ministry said in a statement.

A three-year war in the wake of the Soviet Union’s collapse resulted in an inconclusive truce, with neither party in the conflict agreeing to terms for a peace treaty.

German Foreign Minister Frank-Walter Steinmeier, who heads the German chairmanship of the Organization for Security and Co-operation in Europe (OSCE) on Wednesday met with Armenian President Serzh Sargsyan in Berlin.

Earlier Wednesday, Sargsyan met with German Chancellor Angela Merkel in a pre-planned visit. She offered Germany’s “constructive support” to end the frozen conflict, but warned it would take time to resolve the decades-long dispute.