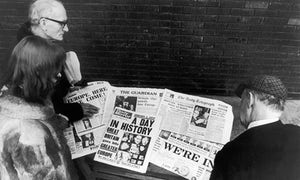 Her Majesty’s ambassador to Denmark, Dominic Schroeder, drew himself up to his full 1.8 metres (5ft 10in), puffed out his chest and gave the Danish finance minister a jolly good telling-off. Britain was a permanent member of the UN security council, a proud member of the G7 and the G20, and a bloody good egg.

“That’s not to my mind,” Schroeder growled, the record of a “diminished or diminishing power”. With all the menace of a man on the brink of doing something he would come to regret, Schroeder added: “I think I’ll leave it there.”

The target of the ambassador’s broadside was Kristian Jensen, the 46-year-old golden boy of Danish politics running the ministry of finance who, moments earlier at the same conference in Copenhagen, had had the gall to suggest that Britain’s days as a global power had been and gone and that Brexit would be a “disaster for the UK”.

“There are two kinds of European nations,” Jensen told the audience gathered for the Road to Brexit event in the Danish parliament. “There are small nations and there are countries that have not yet realised they are small nations.”

He added: “It is a paradox that the country that once had an empire on which the sun never sets, that ruled the waves, that in its heart is truly global, is now drawing back from the world’s most successful free trade area. It is a paradox that I cannot get…

“I had the privilege of meeting Boris Johnson shortly after he took office. Bojo said to me: ‘Come on Kristian, don’t be so sad, there must be something good about Brexit’. I just shook my head and said: ‘No. There is nothing.’

Speaking later in his office in the ministry of finance, Jensen was unapologetic. There was no point in making a speech and it not having an impact, he joked. Britain appeared in need of a reality check and he hoped the country would take a pause and seek a softer Brexit in the wake of what he termed the “Mayday” general election result.

“There is still this notion in some countries that because they have been the rulers of the 20th century they will continue to be that in the 21st century,” he said. “They [the UK] are a member of all these groups [G7, G20, UN permanent security council] but what has happened to the value of the pound since Brexit? What will happen in the coming years when the finance sector is perhaps looking to Frankfurt or Paris? What will happen when inflation rises? How will they be in the future? I am very concerned about Britain’s economy right now … I think France will be the spokesperson for the EU [on the security council].”

Denmark has taken Brexit very badly. The country joined the European community (as it was then known) at the same time as the UK in 1973, and largely because of the UK, given the extent to which the economies were interlinked (they sold a lot of bacon to Britain).

Pragmatic, rational and suspicious of visions of a European superstate, the two governments had worked together within the European council, cocking a snook at the French and others. “I think the response [in Denmark to Brexit] ranges from surprise to repulsion. How can they do that? Would you leave your best friends among enemies?”, said Jens Klarskov, chief executive officer of the Danish Chamber of Commerce. “That’s what you’ve done. We were best pals and now you are leaving us.”

ir Nigel Sheinwald, a former British ambassador to the US and the EU who was a top adviser to Tony Blair when he was prime minister, admitted in his turn at the conference that all was not really well, however.

“The rest of the world’s view of the UK is actually changing quite fast,” he mused. “We used to be known for a pragmatic, steely state craft, keeping calm and carrying on. But it feels a bit different today.”

“We have seen two British prime minsters make rather impulsive and potentially disastrous decisions in their party political interest, which it turns out have huge repercussions for our political stability, our prosperity and our place in the world.” Who knew?