Mistrust. Escalation. Assertiveness. Unpredictability. Welcome to the new normal in the Asia-Pacific. 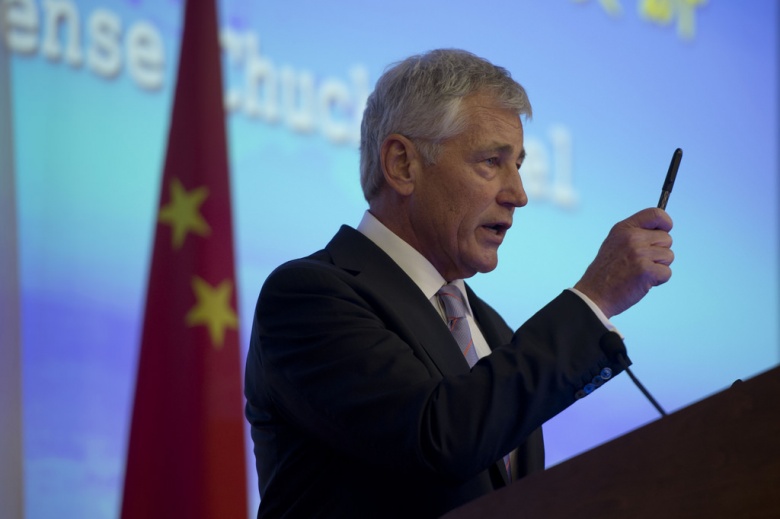 On May 25, amid the Russia-China ‘Joint Sea-2014’ military exercise, it was reported that Chinese fighter jets flew within 100 feet of two Japanese reconnaissance planes located in the two countries’ overlapping air defense identification zones (ADIZ) in the East China Sea. This was one of a string of provocative Chinese actions in disputed territories since President Obama concluded a visit to Asian allies last month. If China is testing American resolve to pursue its Asia-Pacific rebalancing, it received a forthright response in the shape of Secretary of Defense Chuck Hagel’s speech at the International Institute for Strategic Studies’ annual Shangri-La Dialogue. Strengthening similar comments made in a visit to Japan prior to President Obama, Hagel called out China for undertaking “destabilizing, unilateral actions asserting its claims in the South China Sea.” Japanese Prime Minister Shinzo Abe’s keynote address to the dialogue was similarly critical, albeit less pugnacious, and pledged “to support seamlessly the capacity of ASEAN countries in safeguarding the seas.” In response, Chinese General Wang Guanzhong, diverting from his prepared speech, berated Hagel and Abe for making “unwarranted” and “provocative” accusations that violated the spirit of dialogue. General Wang summed up the Chinese position saying that Hagel’s speech was “full of hegemony, threat, intimidation.”

It is easy to dismiss Wang’s blustery delivery as shrill rhetoric for nationalist audiences back home, but it is symptomatic of an increasingly stark clash of perceptions. Beijing maintains that its actions in disputed territories and waters are legitimate, consistent with upholding core strategic interests and fit the definition of rising peacefully. What the United States and countries in the region see is China aggressively asserting claims, concretizing disputes and presenting disputants with fait accompli that they either have to accept or risk economic and other retaliations. While China argues that rising Japanese nationalism and “normalization” is the greatest threat to regional stability, Japan says China has refused all offers to talk and build confidence, preferring instead to demonize Prime Minister Abe. What Washington conceives as the careful balancing of interests in the Asia-Pacific, Beijing sees as a virulent new form of containment.

Post-Olympics and financial crash, Beijing sensed a shift in power dynamics in the Asia-Pacific and adjusted its outlook accordingly. The “Near Sea Doctrine” formulated in 2009, which sets out the rationale for greater control over the East and South China Seas, is emblematic. When Obama announced the “pivot” in 2011, Beijing was quick to perceive it as a balancing of China’s growing power, but rhetoric outweighed action, and Beijing remained confident that eventually, countries in the region would have no choice but to compromise and accommodate China. A half-hearted “pivot” would complicate and slow the process down, but would not thwart it. As late as May 2013, President Xi felt confident enough to propose the idea of a New Model of Great Power Relations to President Obama. The concept is not a far departure from long-standing Chinese foreign policy and proved its mettle in helping keep Sino-Russian relations on track during the previous decade. It tacitly recognizes American hegemony and pushes acceptance of a multipolar world order. The concept encourages stable bilateral relations and asks that the United States respect China’s core interests, refrain from actively harming them and give Beijing a greater voice in global governance.

But if the optimists in China hoped that the United States might even leverage its influence over third parties in the South China Sea to China’s advantage on the principle that this was China’s sphere of influence, Obama has done the opposite, to the extent of openly supporting and encouraging Tokyo and Manila in their disputes. Beijing sees this shift as explicitly emboldening American allies to hinder China’s pursuit of legitimate material and sovereign interests. After several years of growing confidence, and the misconception that the United States would allow China greater freedom to act unencumbered in Asia, a rebalancing policy reinvigorated by President Obama’s recent trip, is a wake-up call to Beijing, which has been testing these new conditions.

Four days after the conclusion of President Obama’s visit, a Chinese state oil company stationed a billion-dollar, deep-water drilling rig a mere eighteen nautical miles off the disputed Paracel islands, deep within Vietnam’s EEZ. Contravening previous agreements on joint exploration, this surprising but presumably pre-planned move led to physical confrontations on the sea and deadly anti-China protests in Vietnam. As a test to demonstrate the gap between Obama’s rhetoric and U.S. capacity and commitment to the region, Beijing could have made its point in a relatively harmless way, relocating the rig once its ostensible reconnaissance mission was completed. The violent reaction in Vietnam took Beijing by surprise, but unable to back off, the situation escalated further with the sinking of a Vietnamese fishing boat on May 27 in the disputed Paracel Islands. The two sides blame each other for the incident. Reactions to collateral damage resulting from accumulating physical clashes will be increasingly difficult to isolate from nationalist domestic audiences and thus, more susceptible to escalations. In the case of the Sino-Japanese dispute (as the narrowly averted plane crash shows), the two countries are playing a game in which slight miscalculations could cause an unwanted escalation of the dispute. Despite growing tensions, the two economies are so intertwined that armed confrontations are in neither side’s interest. After Japan’s nationalization of the Senkaku/Diaoyu Islands in 2012, anti-Japan protests in China had a particularly negative impact on Japanese-made car sales in China for a year before starting to rebound. The tourism industry, other Japanese-made products and Japanese-owned companies were also impacted. Despite these fluctuations, economic relations have continued relatively unaffected.

The United States and others are using the territorial disputes to see how China will use its new economic and growing military power. China is similarly using them to gauge how the United States will behave. Thus far, Beijing does not like what it sees. China perceives that the U.S.-Japanese security alliance has encouraged Japanese aggression, symbolized by the nationalization of the Senkaku/Diaoyu islands, which left it no choice but to react strongly. Beijing says that Abe’s Japan has become more assertive, raising the specter of historic grievances; emboldened by the United States, which encourages Japan to strengthen its military, Abe is actively seeking to reinterpret the constitutional article on the right to exercise collective self-defense. Distinct from the symbolism of Abe’s visits to the Yasukuni Shrine, Beijing points out that Japan is actively establishing a military presence in disputed territories. In April, for instance, Japan’s defense ministry announced the construction of a military radar station on Yonaguni Island, located about ninety miles from the disputed Senkaku/Diaoyu Islands, and said 150 Self-Defense Force personnel would be deployed there within the next two years. For Beijing, President Obama’s declaration that the U.S.-Japanese military alliance extends to the Senkaku/Diaoyu islands demonstrates the fallacy of American “neutrality” on the dispute. Washington’s failure to urge Japan to acknowledge the existence of the dispute is proof positive of American intentions.

In terms of the East and South China Sea territorial conflicts, Beijing accepts that a certain amount of friction is inevitable as measures are taken to concretize various disputes. Typically, however, the responsibility for growing tensions is displaced to others, in particular the U.S.-Japanese alliance. In the face of what is interpreted as a fresh commitment to containment, various officials including Foreign Minister Wang Yi have emphasized that Chinese foreign policy should be consistent, proactive and not deviate from long-term objectives. In this vein, Premier Li Keqiang’s first government work report stated that China will “resolutely safeguard sovereignty, security and development interests”, which all but guarantees a degree of friction in the neighboring seas. For Beijing, the pursuit of these goals is consistent with the broader objective of rising peacefully, giving rise to diplomatic behavior that appears contradictory. In October 2013, for instance, President Xi and Premier Li visited Southeast Asia, calling for a maritime silk road and other magnanimous gestures redolent of charm offensives in years gone by. But the benign rhetoric did not align with attempts to establish a physical presence in disputed areas combined with military intimidation and economic punishment for rivals. Chinese claims that military modernization and defense-budget increases are for purely defensive purposes and that it does not harbor revisionist intentions, are increasingly incompatible with its foreign-policy behavior.

The near-accident on May 25 was the closest call since China unilaterally declared its ADIZ last November, although it was far from an abnormal occurrence in the disputed airspace. In 2013, the Japanese Air Self-Defense Force reported intercepting Chinese aircraft 415 times, a 35 percent increase from 2012. While “routine”, the frequency of these incursions contributes to the sense of mistrust and impending conflict in the region and increases the chances of miscalculations, accidents and escalations. For now, the risk of armed conflict remains low, but an unhealthy clash of perceptions feeds and is fed by growing “assertiveness” on all sides, creating an unpredictable environment and suggesting testing times ahead in the Asia-Pacific.