Breaking down the president’s remarks could result in an interesting conclusion. 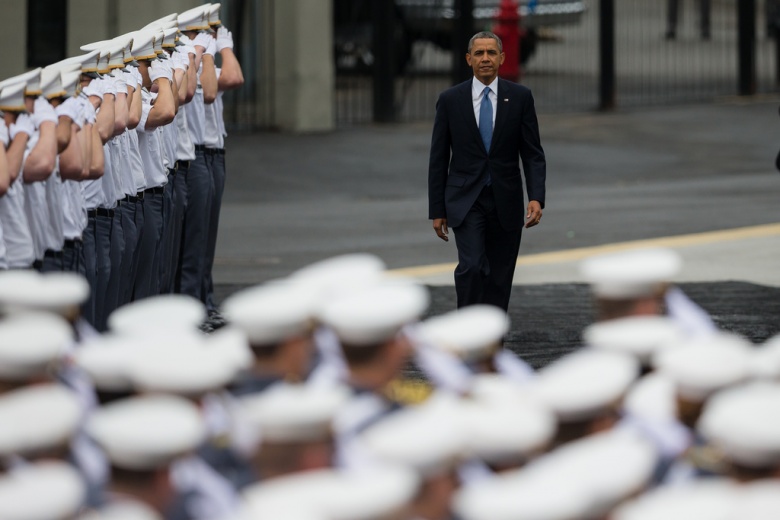 In December 2009, not quite a year into office, President Barack Obama addressed the cadets at West Point to announce the Afghan surge. Faced with political goals that were unachievable given the time and resources available as well as strong pressure from his hand-selected field commander, General Stanley McCrystal, and congressional Republicans, he ordered in another 30,000 troops to support a more aggressive counterterrorism posture while simultaneously announcing that the war effort world end in 2014. It was the worst possible strategic decision, but one that provided political cover.

On Wednesday, Obama returned to West Point to give another speech, this time to graduates of a class that had yet to enter the academy in 2009. His foreign policy has matured significantly over the years.

He declared, correctly, that “by most measures, America has rarely been stronger relative to the rest of the world.” As has been true—but often ignored—for going on a quarter century, “Our military has no peer. The odds of a direct threat against us by any nation are low and do not come close to the dangers we faced during the Cold War.” While some might quibble with his assertions that “our economy remains the most dynamic on Earth; our businesses the most innovative,” it’s inarguable that our economy remains the most powerful. Additionally, he rightly noted, “Each year, we grow more energy independent. From Europe to Asia, we are the hub of alliances unrivaled in the history of nations. America continues to attract striving immigrants.”

It’s also true, although perhaps not an unalloyed good, that “when a typhoon hits the Philippines, or schoolgirls are kidnapped in Nigeria, or masked men occupy a building in Ukraine, it is America that the world looks to for help.”

From there, Obama transitioned to an odd straw man: “Today, according to self-described realists, conflicts in Syria or Ukraine or the Central African Republic are not ours to solve.” The president declared that “in the 21st century American isolationism is not an option. We don’t have a choice to ignore what happens beyond our borders.”

But few realists of any significance, and certainly none that have been in positions of power in the last seven decades, advocate isolationism, much less counsel ignoring what happens beyond our borders. After all, foreign-policy professionals spend their lives focused on the world beyond our borders.

No realist I know—and I know plenty—would disagree with Obama’s assessment that, “If nuclear materials are not secure, that poses a danger to American cities. As the Syrian civil war spills across borders, the capacity of battle-hardened extremist groups to come after us only increases. Regional aggression that goes unchecked—whether in southern Ukraine or the South China Sea, or anywhere else in the world—will ultimately impact our allies and could draw in our military. We can’t ignore what happens beyond our boundaries.”

Nor, frankly, do most realists disagree that “we have a real stake, an abiding self-interest, in making sure our children and our grandchildren grow up in a world where schoolgirls are not kidnapped and where individuals are not slaughtered because of tribe or faith or political belief. I believe that a world of greater freedom and tolerance is not only a moral imperative, it also helps to keep us safe.”

Where realists differ with idealists and liberal interventionists and neocons is not that those things matter but how one responds to them and how one balances these interests with others. Most notably, we’re generally skeptical of the use of military power to solve nonmilitary threats.

The good news is that, despite eschewing the realist label and lacing his speeches with idealist rhetoric, the Obama of 2014 is very much a realist in practice. After the above set-up, he got down to matters of actual policy and declared, “to say that we have an interest in pursuing peace and freedom beyond our borders is not to say that every problem has a military solution. Since World War II, some of our most costly mistakes came not from our restraint, but from our willingness to rush into military adventures without thinking through the consequences—without building international support and legitimacy for our action; without leveling with the American people about the sacrifices required.”

From that bold statement, he picked up steam:

Let me repeat a principle I put forward at the outset of my presidency: The United States will use military force, unilaterally if necessary, when our core interests demand it—when our people are threatened, when our livelihoods are at stake, when the security of our allies is in danger. In these circumstances, we still need to ask tough questions about whether our actions are proportional and effective and just. International opinion matters, but America should never ask permission to protect our people, our homeland, or our way of life.

On the other hand, when issues of global concern do not pose a direct threat to the United States, when such issues are at stake—when crises arise that stir our conscience or push the world in a more dangerous direction but do not directly threaten us—then the threshold for military action must be higher. In such circumstances, we should not go it alone. Instead, we must mobilize allies and partners to take collective action. We have to broaden our tools to include diplomacy and development; sanctions and isolation; appeals to international law; and, if just, necessary and effective, multilateral military action. In such circumstances, we have to work with others, because collective action in these circumstances is more likely to succeed, more likely to be sustained and less likely to lead to costly mistakes.

Readers of The National Interest have seen variants of these words countless times over the years written in frustrated response to calls for intervention in crisis after bloody crisis. They’re the very essence of realist foreign policy.

Increasing my confidence that I’m reading the speech correctly is the fact that the editorial boards of the New York Times, Washington Post, and Wall Street Journal—who have banged the drums for military intervention so loudly for the past two decades—uniformly hated it.

The gang at the Post were in especially high dudgeon over the president’s limiting of unilateral military action to “core interests,” declaring:

This binding of U.S. power places Mr. Obama at odds with every U.S. president since World War II. In effect, he ruled out interventions to stop genocide or reverse aggression absent a direct threat to the U.S. homeland or a multilateral initiative. Those terms would exclude missions by previous administrations in places such as Somalia and Haiti and Mr. Obama’s own proposal to strike Syria last year—but not the war in Iraq, which was a multilateral campaign.

The notion that, even with the advantage of hindsight, the debacle in Somalia was worthwhile is stunning. The mission to restore the hapless Jean Claude Aristide to power in Haiti was thankfully accomplished without opposition, as a delegation consisting of former president Jimmy Carter, former senator Sam Nunn, and retired Joint Chiefs chairman (and later Secretary of State) Colin Powell managed to persuade the junta to relinquish power peacefully rather than be violently removed by marshaled U.S. forces. But it’s not as if Haiti became a shining beacon of good governance thereafter.

It remains to be seen how the Syrian tragedy will play out or what role the United States will ultimately play in its resolution. But it’s hard to lament the cancellation of an ill-conceived military strike that was being planned only because the president had backed himself into a corner with empty threats.

As to the matter of genocide, as I pointed out in this space a year ago, “While ‘never again’ is a nice sentiment, it’s not a useful public policy.” In the real world, presidents have to balance multiple competing interests, weigh costs and benefits, and often choose between least bad outcomes.

Making grown-up decisions based on the world as it is, not as we would wish it to be, is at the heart of realism. I’ll settle for a president that practices realism while rejecting the label. We have, after all, suffered from the reverse—the results of which are far worse.