Spices have been revered for their health benefits throughout history. But can they cure a hangover or help shift those extra Christmas pounds?

Whether you’re grating nutmeg into your speculaas (Dutch spiced shortcrust biscuits) or sprinkling some cinnamon into your Glögg (a Norwegian version of mulled wine), adding a touch of spice is an easy way to make food and drink more appetising.

According to Ayurvedic medicine, an ancient belief system in Hinduism, spices can be warming or cooling and are used to affect the balance of the digestive system.

“They act as a stimulus to the digestive system, relieve digestive disorders and some spices are of antiseptic value,” explains Dr Krishnapura Srinivasan, a scientist at the Central Food Technological Research Institute in Mysore, India.

Spice up your cooking 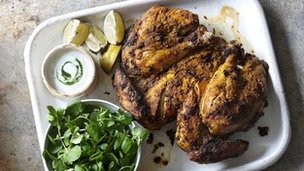 It is not surprising that spices have become associated with dieting. As far back as 2500 years ago, the Chinese teacher and philosopher Confucius recommended eating ginger at every meal to improve digestion. But there is still no scientific consensus on how spices affect our health.

“There’s a perception that spices are good for dieting as this is often covered in the media; women will often latch on to anything that sounds as though it’s an easy way to lose weight,” explains Azmina Govindji, an award-winning dietician from the British Dietetic Association.

They hypothesised that inflammation in overweight people could be caused by oxidative stress. This is a process when chemically reactive molecules known as free radicals trigger physiological events or damage tissues.

But the results of the month-long clinical trial were negative. No evidence was found to suggest that red pepper or turmeric alters inflammation by influencing oxidative stress.

This could point to the need for higher doses and longer testing periods, scientists say. Or that the spices simply have no effect.

Cayenne pepper is another spice touted as a weight loss solution. You might have added it to poached eggs or corn on the cob, but how about eating it with maple syrup?

The cayenne pepper and maple syrup diet made headlines in 2007, when US singer Beyonce Knowles reported losing 20lb (9kg) after following it for two weeks.

So why is the spice hotly tipped as a solution to weight loss?

“There have been suggestions that red cayenne pepper may be a useful aid to weight management, especially in people who don’t normally eat chilli peppers,” says Ms Govindji.

“But this remains to be confirmed.”

The effect of red pepper on thermogenesis, a process which affects metabolism and appetite, was studied by scientists at Purdue University, Indiana in the US.

The study found that as body temperature increased, metabolic rate increased, and the desire to eat fatty foods was decreased in participants who ate red pepper as part of a meal compared to those who didn’t.

Another study by researchers at Kyoto University, Japan found that males in the country who consumed a normal diet along with a red pepper extract known as “CH19-Sweet” experienced slightly decreased body fat and weight loss after two weeks.

But can we draw any real conclusions from studies such as these?

“The research around spices is really interesting, but there just isn’t enough of it to be sure we can make recommendations,” says Ms Govindji.

A herb or a spice? 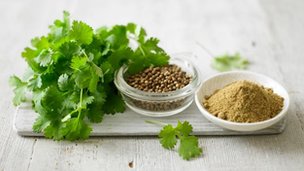 A spice is usually defined as an aromatic part of a tropical plant, be it a root, bark, flower or seed.

With the exception of vanilla, chilli pepper and allspice, nearly all spices are of Asian origin.

A herb is a plant that does not have a woody stem and dies at the end of each growing season.

“We know that reducing sodium is a really important part of health, reducing risks of high blood pressure and strokes, and spices help to reduce sodium in cooking as they enhance the flavour or food.”

One chef advocating the power of spices to transform our food and health is Gurpareet Bains.

“Spices are the most anti-oxidising foods on the planet, they’re very powerful foods,” says Mr Bains, author of Indian Superspices, a collection of “lab-inspired” recipes designed to treat the symptoms of everyday illnesses.

“Everyone says that Indian food is unhealthy but with Indian Superspices I completely throw that out of the window because Indian food can be medicine at the same time.”

Mr Bains says his “turkey with blueberries, cinnamon and fennel” recipe is one of the healthiest meals in the world, perfect for Christmas leftovers.

“It contains as many antioxidants as 23 bunches of grapes,” he says.

For insomniacs, Mr Bains has also created a nutmeg-infused lamb masala which he tested out live on air on the BBC Asian Network andBBC London radio.

“What I did was create a meal that helps people fall asleep and nutmeg is a powerful sedative.

“The presenters started to fall asleep at 10am in the morning.”

For a hangover, Mr Bains recommends making some chai with spices such as nigella seeds, fennel, cardamom and ground ginger.

“Nigella is an amazing spice, almost like a multi-targeting spice, if you have cold and flu or allergic reactions.

“Simply add one teaspoon into water, simmered for ten minutes covered, pour over mint leaves and honey and you’ll have a tea to treat a few different types of ailments,” says Mr Bains.

When cooking with spices you’re spoilt for choice in terms of the range of ingredients and recipes you can choose from.

But whether you’re taking a leaf out of the Hairy Dieters book and roasting some cumin-crusted vegetables, or cooking up a spiced apple and raisin crumble, ultimately it is not the spices alone that help you lose weight but how you cook with them.

“You could potentially add more flavour to food by using cinnamon in porridge or nutmeg in bread and butter pudding, reducing the need for too much sugar,” says Ms Govindji.

“But the spice itself won’t promote the weight loss.”

“Substituting spices for sugar can help people lose weight only if this promotes a reduction in calories.”