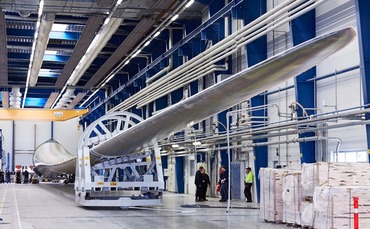 The giant scale of the latest offshore wind farms could be about to get bigger still, after developers in Denmark announced they have built the world’s longest wind turbine blade.

Offshore wind turbine manufacturer Adwen and turbine rotor blade supplier LM Wind Power announced this week that manufacture of the first of the 88.4 metre-long blades has now been completed at a factory in Lunderskov.

The blade has been specifically designed for Adwen’s AD 8-180 wind turbine model, which has 8MW nominal capacity and a 180 metre rotor diameter.

LM Wind Power said the record-breaking length of the turbine represents “the best compromise” between the cost of production, swept area and weight of the blade, energy produced, and the loads transferred to the wind turbine.

The blade has been designed with scalability in mind in order to enable the further development of Adwen’s 8MW platform, the firm added.

“The LM 88.4 P blade is an extraordinary example of industrialized innovation at record breaking scale,” said Marc de Jong, chief executive of LM Wind Power, which manufacturers around one in every five wind turbines which are installed worldwide. “It is based on innovation building blocks, rooted in 35 years of real life experience, in the design, technology and manufacturing of ultra-long, reliable blades.”

Luis Álvarez, general manager at Adwen, said the project underlines how the company – a joint venture between renewable energy firm Areva and Spanish wind power group Gamesa – is at the forefront of the offshore wind industry.

“When you are building the largest wind turbine in the world, almost everything you do is an unprecedented challenge,” he said in a statement, adding that the ability to now begin testing is a key step forward in the development of the firm’s AD 8-180.

The blade is now set to be transported to a facility in Aalborg, in northern Denmark, for testing.

The first onshore prototype of the AD 8-180 turbine is set to be installed by the end of the year in Bremerhaven, Germany, with serial production expected in 2018.