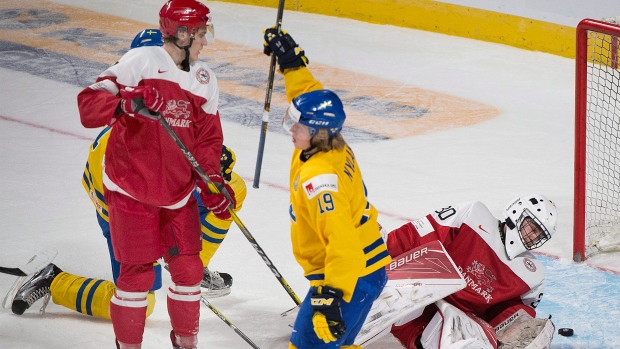 The 16-year-old had a goal and an assist in limited ice time as Sweden routed Denmark 6-1 in the tournament opener before an announced crowd of 4,518 at the Bell Centre on Monday afternoon.

“I just did my best and I had luck,” said Dahlin, the Trollhatten, Sweden native who is seen as a potential first overall pick in the 2018 NHL draft. “Of course I’m nervous, but I need to play my game so I just go out and have fun.”

Alexander Nylander scored twice while Carl Grundstrom, Joel Eriksson Ek and Jonathan Dahlen also scored for Sweden, one of the tournament favourites who are seeking a first world under-20 gold since 2012 in Calgary and Edmonton.

Dahlin, a defenceman in Sweden’s top league, has been compared by some to Ottawa Senators star Erik Karlsson. He was used sparingly by coach Tomas Monten until getting regular ice time in the third period, but managed to make an impression against last year’s quarter-finalists.

When he played, it was mainly with one of the top two lines so he could use is attacking skills.

“I hope he can grow, as the other players, but this is his first game and playing in the world juniors as a 16-year-old is a pretty big thing, so we wanted to give him an easy start,” said Monten. “He showed he can play.”

Nikolaj Krag scored with 2:07 remaining for Denmark on a screened shot from the left circle to spoil Felix Sandstrom’s shutout bid.

“We’ve got a really good team this year but I can’t promise anything,” Denmark’s Christian Mieritz said of his team’s chances in the tournament. “We have to give everything, every single shift, to get into the quarter-finals.”​​

Final 40 minutes belong to U.S. in rout of Latvia

Patrick Harper opened the scoring for the Americans (1-0-0) 6:27 into the game, but Renars Krastenbergs responded for Latvia (0-1-0) to make it 1-1 after 20 minutes in the tournament opener for both teams at Air Canada Centre.

The U.S. regained the lead for good when Colin White scored 6:29 into the second and Keller made it a 3-1 contest late in the period.

Keller scored his second of the game with 7:41 to play in the third. Jeremy Bracco added another at 17:31 while Jordan Greenway got on the scoreboard in the final minute of regulation time.

American goalie Tyler Parsons only had to make 11 saves for the victory. Marek Mitens stopped 24-of-30 shots for Latvia.

“We got better as the game went on,” said American coach Bob Motzko.

“You could tell there were some nerves in the first period, but after the guys settled in we found our style of play and got the job done. We’ll learn from this as we get ready for the next one.”

In Montreal, Michael Spacek scored with 1:18 left to lift the Czech Republic to a 2-1 victory over defending champion Finland.

Spacek, a Winnipeg Jets prospect with the Western Hockey League’s Red Deer Rebels, fired a shot through traffic from just inside the blue line that went inside the post.

“It was a good goal, it was special in my career,” said Spacek. “I think we played good. We played like one man.”

“It was a big win for everyone here.”

Daniel Krenzelok also scored for the Czechs, who are seeking their first world junior medal since they took bronze in 2005.

Joona Luoto scored for Finland, which has won two of the past three world juniors including last year at home.