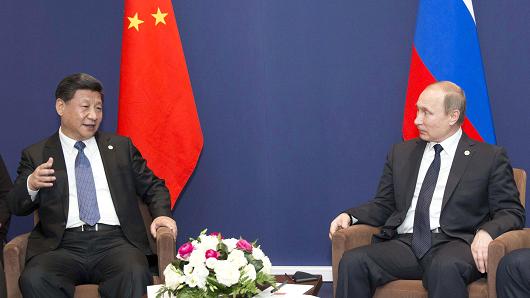 Prime Minister Vladimir Putin is embarking on an Asia charm offensive to beef up his country’s international profile, as the economy reels from a deep recession amid Western sanctions and a slump in oil prices.

Putin is due to arrive in China this Saturday for an official state visit and a number of business deals as well as cooperation in security and geopolitical arenas are expected to dominate the agenda.

The trip comes on the heels of the European Union’s agreement this week to extend energy, financial and defense sanctions on Moscow for another six months in retaliation against the latter’s annexation of Crimea in 2014. Washington also maintained its current sanctions program in May.

More than two years of sanctions, combined with sliding crude prices and a crumbling currency have taken a toll on the nation; gross domestic product shrank 3.7 percent in 2015 and the International Monetary Fund (IMF) anticipates a 1.8 percent decline this year.

“Russia is attempting to show the West that it is not isolated from the world. It hosted its economic forum in St. Petersburg last week drawing a string of powerful businessmen and politicians. Putin is now headed to China, and will likely visit Japan in September,” said Lauren Goodrich, Stratfor’s senior Eurasia analyst.

While Moscow has long maintained robust relationships with Asian heavyweights, including China, Japan and India, there are a number of timely factors propelling Putin and his counterpart Chinese President Xi Jinping to deepen bilateral ties.

Washington’s pivot to Asia, China’s ‘One Belt, One Road’ (OBOR) infrastructure program and Indian Prime Minister Modi’s recent U.S. trip give Russia a unique opportunity to exert its presence in Asia and signal its independence from the West, pointed out Stuart Rollo, research assistant at the University of Sydney.

What Russia wants from China

Increased investment from China will likely be Putin’s primary focus as he looks to mitigate Russia’s current economic pain.

“Russia is desperate for new partners and markets for its military industry–which China can foster,” said Goodrich. At the St. Petersburg forum, Russia signed a string of deals to develop rocket engines, airplane engines and helicopters for China while talks also advanced on potential Chinese participation in a high-speed rail project between Moscow and Kazan.

The visit could also produce insight on the 19.5 percent stake in state-owned oil giant Rosneft, dubbed the crown jewels of Russia Inc, that Moscow is looking to sell. “We need the money,” Putin admitted this week after data showed May’s federal budget deficit stood at 5.5 percent of gross domestic product, wider than the government’s 3 percent target.

Companies in India and China have expressed interest in the $11 billion deal and Putin’s trip could involve some of the most serious discussions between Rosneft and various Chinese energy companies, said Goodrich. So far, Kremlin officials have indicated their preferred outcome would be joint ownership between China and India.

What China stands to gain

While Russia’s focus remains on trade and military, Xi is likely to concentrate more on geopolitical matters.

“In economic terms, other than energy, Russia is unable to offer much of anything to China,” said McNamee. Indeed, steady energy relations will be crucial for Xi after Russia surpassed Saudi Arabia to become China’s largest oil supplier in March.

“Of far more importance is the political support Russia offers, regarding foreign policy matters at the United Nations, Group of 20 and other venues … China, naturally, is happy to have a useful ally as it seeks to reform the existing U.S.-led order to attain its geopolitical goals,” McNamee continued.

The influence Russia wields over smaller states in the region to secure enthusiastic participation as well as its mineral and energy wealth, which will be used in the broader economic development of member states, will be crucial for China, explained Rollo of the University of Sydney. If OBOR discussions between Putin and Xi go well, it could produce a rival to regional trade agreements, specifically the American-led Trans Pacific Partnership (TPP) and Transatlantic Trade and Investment Partnership (TIIP), Rollo added.

Xi may also use the visit to discuss Chinese interests in the South Caucasus nation of Georgia. The country’s Black Sea ports, east-west highway and railway infrastructure are invaluable assets for China’s trade ambitions connecting the Eurasian interior and Europe, according to Stratfor.

Russia could also prove to be a useful partner tensions amid China’s various territorial disputes with its Asian neighbors. Earlier this month, three Russian navy ships and a Chinese frigate passed through the disputed East China Sea at the same time, but there was no confirmation that the move was planned.