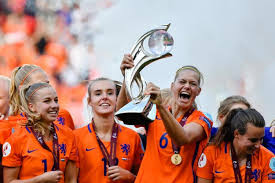 The hosts fell behind when Nadia Nadim scored from the penalty spot in the opening minutes, but they soon equalised through Vivianne Miedema.

The Dutch then grabbed an advantage, as Lieke Martens made it 2-1, but the Danes were back on level terms 12 minutes before half-time, with Pernille Harder expertly finishing.

Sherida Spitse made it 3-2 on a free-kick shortly after the restart, Miedema completed a brace in the closing stages, and the Netherlands were deservedly crowned European champions.

The match got off to a frantic start, as each team found the back of the net in the opening 10 minutes.

Netherlands fans were silenced when Denmark took the lead after just six minutes. Sanne Troelsgaard was tripped in the box, and Nadim was calm as she stepped up to the penalty spot, comfortably beating goalkeeper Sari van Veenendaal.

The early goal ignited a reaction from the home fans, who created a huge noise as they cheered their side back into the match. The Dutch were back on level terms only four minutes later, and the stadium was bouncing after Miedema scored at the far post. Shanice van de Sanden’s pace was too much for the Danes, and she assisted with aplomb to help her team level.

The action was manic and continuous, and four goals followed in what turned out to be the most entertaining game of the competition.

Barcelona attacker Martens again had the crowd on its feet on 28 minutes, curling the ball home for the Netherlands. She let the ball roll across her body on the edge of the box and swung her shot into the far corner.

But Harder took her chance just five minutes later, attacking the penalty area and driving a low shot past Van Veenendaal. The captain proved to be one of the stars of the competition, as the Dutch could not control her with the ball at her feet in the first half.

Early in the second half, though, Spitse rolled a free-kick past the wall and into the bottom corner. The fans created an electric atmosphere as the players ran to the touchline to celebrate with vigour.

Denmark struggled to move through the gears in the second half, and the Netherlands back four pushed up and squeezed, forcing the Danes to operate in their own half of the pitch. Denmark seemed to lack the intensity needed to match their opponents, and the game began to slip away from them.

It was left to Miedema to wrap up the victory, and the striker was cool as she made it 4-2 as the clock ticked down to the final whistle.

The Netherlands were certainly the best team at the Euros, and they deservedly claimed the title on home soil. The victory marked the first time the Dutch have won the competition.