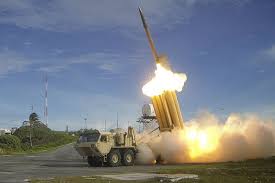 South Korea and the United States picked the mountainous southern town of Seongju as the location for deploying a Terminal High Altitude Area Defense system on Wednesday as the allies are speeding up efforts to place the anti-ballistic missile shield to counter North Korea’s worsening nuclear and missile threats.

“South Korea and the U.S.’ joint working group have proposed the Seongju area, North Gyeongsang Province, as the optimal place for the deployment … and the countries’ defense ministers have approved it,” the Ministry of National Defense said in a statement.

The placement of the THAAD system in Seongju, 296 kilometers southeast of Seoul, would help “more firmly secure the safety of our people in one half to two third of South Korea’s entire territory while dramatically increasing the capacity to defend key state facilities like nuclear power plants and oil refining installations as well as the South Korea-U.S. alliance forces,” the ministry said.

The latest decision came after the allies announced their decision to deploy the high-tech defense shield in South Korea at least by the end of 2017.