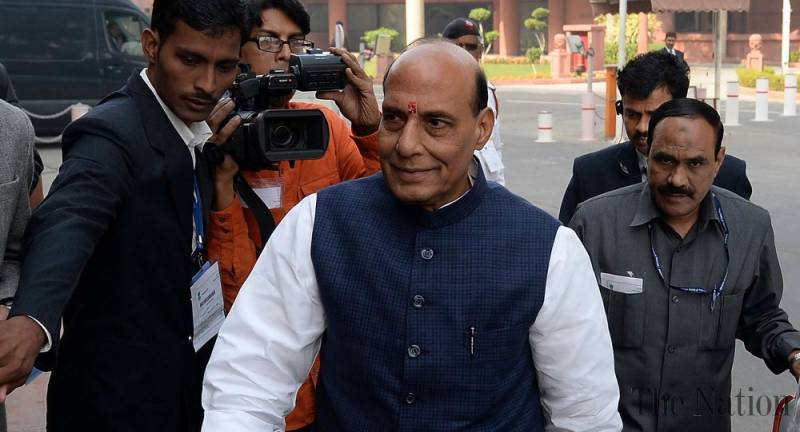 On the sidelines of SAARC conference – currently, underway in Islamabad – the interior ministers of Pakistan and India are expected to meet amid mounting tension over Kashmir.

However, officials in the Indian government have claimed that Singh would not meet his Pakistani counterpart Chaudhry Nisar Ali Khan.

Earlier, Indian media reported that the Indian Home Minister Rajnath Singh is expected to raise Pathankot and 26/11 attacks during his address at the South-Asian conference although a SAARC rule forbids member countries from highlighting bilateral issues.

Singh would mention both the attacks ‘skilfully’ working around the rule, Indian media continued to stress.

The Indian minister would also stress on the need for member states to cut off terror sponsors and take urgent action against ‘state actors’ that aid and support global terror, without any reference to Pakistan, said Indian media quoting sources.

On Wednesday, secretaries of the member countries are meeting in the federal capital where Pakistan’s Arif Khan has been selected as chairperson of the conference.

During the first day of the meet that started on Tuesday, aimed at strengthening networking and enhancing information sharing among SAARC member countries, additional secretaries-level meetings were held.

Earlier, members in the seventh meeting of Immigration authorities of SAARC deliberated on SAARC Visa Exemption Scheme (SVES) and other related matters.

Interior minister-level talks would begin on August 4 following which Prime Minister Nawaz Sharif would address the ending session of the most important South-Asian meet.

Recent unrest in the divided Kashmir created a stand-off between Pakistan and India as they both accused each other of triggering violence in the valley and claimed the territory in its entirely.

In the past too, attempts were made to promote good relations between the two nations but they were always upset by unpleasant incidents.

Previously, the infamous Pathankot attack in India spoiled the efforts for normalizing bilateral relations with Pakistan while India blamed Pakistan for organizing Mumbai attacks in 2008 that left over 166 people dead.