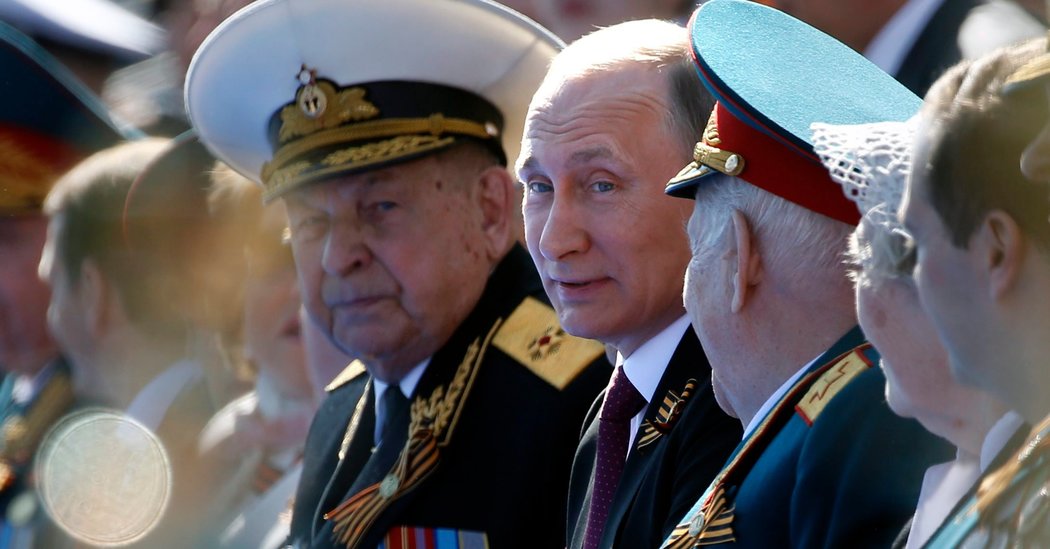 Of the questions raised by charges that Russia was involved in the release of hacked Democratic National Committee emails, at least one — why would Russia do such a thing? — can be answered with a little-noticed but influential 2013 Russian military journal article.

“The very rules of war have changed,” Gen. Valery V. Gerasimov, the chief of the general staff, wrote in the Military-Industrial Courier.

The Arab Spring, according to General Gerasimov, had shown that “nonmilitary means” had overtaken the “force of weapons in their effectiveness.” Deception and disinformation, not tanks and planes, were the new tools of power. And they would be used not in formally declared conflicts but within a vast gray between peace and war.

Those ideas would appear, the next year, in Russia’s formal military doctrine. It was the culmination of a yearslong strategic reorientation that has remade Russian power, in response to threats both real and imagined, into the sort of enterprise that could be plausibly accused of using cyberattacks to meddle in an American presidential election.

‘We are protecting our sovereignty’

Like so many military rethinks, what became known as the Gerasimov Doctrine began as an effort to solve a seemingly urgent problem.

Throughout the 2000s, popular uprisings in Eastern Europe and Central Asia overturned their pro-Kremlin leaders, replacing them with democratically elected governments more inclined to the West.

In Moscow, these “color revolutions,” as well as the subsequent Arab Spring, were seen as a wave of hostile American operations, engineered to topple Russia’s allies and weaken Russia itself.

Sergei Shoigu, the Russian defense minister, said in a 2014 speech that such uprisings were “used as an excuse to replace nationally oriented governments with regimes controlled from abroad.”

The Kremlin felt encircled and threatened by what it took to be a vast American conspiracy whose ultimate goal, it concluded, was the subjugation or outright destruction of the Russian state.

In December 2011, thousands gathered in Moscow to protest legislative elections that had been marred by accusations of fraud. The demonstrations didn’t come to much, but they engendered a fear among Russian leaders that they were next.

President Vladimir V. Putin, at a news conference in 2014, warned that the West was seeking to “defang” the Russian bear — to remove its nuclear weapons so as to gain access to its natural resources.

“Once they’ve taken out his claws and his fangs, then the bear is no longer necessary,” Mr. Putin said. “The issue is that we are protecting our sovereignty and our right to exist.”

Russian military planners, apparently obsessed with such fears, concluded that their best defense would be to go on the offense. Believing that the Americans were already conducting a clandestine war through intelligence operations, media disinformation, and deniable proxy forces, they set out to do the same.

The phrase “hybrid war” — a common label in the West for Russia’s actions — was first used by Russian analysts to describe the supposed American tactics they believed they were countering. They called their own strategy something different: “new generation war.”

Even before this doctrine became formalized, Russia had developed tools of coercion and subterfuge, providing a model for wider usage.

As Russian power has resurged under Mr. Putin, the country has often used asymmetrical methods to assert its interests, particularly in the former Soviet republics it still considers its “near abroad” and rightful zone of influence.

In 2007, amid tensions with the small Eastern European nation of Estonia, Russian media falsely reported that members of Estonia’s Russian minority were being drugged and tortured by police, contributing to riots that injured several people and killed one. The next day, cyberattacks, attributed to a pre-Kremlin Russian group, forced many of Estonia’s major institutions offline.

At no point, in the 2007 episode, did Russia commit an act of military aggression against its neighbor. Yet Estonian leaders say these actions were meant as a message: Even if their country had joined NATO and the European Union, Moscow was still the boss.

These sorts of tools allowed Russia to project power beyond its strength and, just as importantly, to assert its interests abroad despite Western military and political dominance.

To paraphrase Mark Galeotti, a New York University professor who studies Russia’s military, this is a country whose economy is smaller than Canada’s or South Korea’s, yet is seeking a great power role akin to China or the United States. Traditional methods won’t cut it.

Russia deployed its “new generation war” to startling effect in early 2014, when, amid Ukraine’s political crisis, it seized and subsequently annexed the Ukrainian region of Crimea.

While that action is most remembered for the “little green men” — unmarked Russian special forces who seized key locations in a clandestine invasion — there were subtler components as well.

Russian state news media flooded Crimea’s airwaves with false stories about neo-Nazis taking over Ukraine and systematically attacking ethnic Russians, who are a majority in Crimea. As a result, many Crimeans welcomed the unmarked Russian troops, believing they were being savedfrom possible ethnic cleansing.

Dmitry Adamsky, an Israeli analyst, wrote in a 2015 report that this “information struggle” is central to Russia’s new strategy.

This information war, he wrote, “comprises both technological and psychological components designed to manipulate the adversary’s picture of reality, misinform it and eventually interfere with the decision-making process of individuals, organizations, governments and societies.”

While this was especially visible in Crimea, Mr. Adamsky warned that it was also deployed in peacetime and against any target where Moscow seeks influence. It may be intended to pursue a “strategic goal,” such as the weakening of pro-American political parties in Europe, or to simply foment a degree of instability that weakens adversaries.

Mr. Adamsky described this as a form of “subversion” that “aims to deceive the victim, discredit the leadership, and disorient and demoralize the population and the armed forces.”

That sheds light on why Russia might want to release Democratic National Committee emails, whose greatest effect is creating a kerfuffle within Democratic politics. It’s not as if the resignation of the party chairwoman, Debbie Wasserman Schultz, was some strategic Russian ambition.

While some observers say Moscow sees a potential friend in Donald J. Trump, it would also be well within Russian strategy to stir up trouble just to stir up trouble. This is what Mr. Adamsky calls “managed stability-instability” — low-level confusion and disunity that Russia could perhaps one day exploit.

Russia has long seen itself as the victim of these very tactics, accusing Western governments of using vague “Maidan technology,” named for the square where Ukraine’s 2014 protests began, to create “managed chaos” in targeted countries. Embarrassing stories, such as the Russian doping scandal and the Panama Papers, are seen as American information warfare meant to weaken Moscow.

In this view, Kremlin leaders could see releasing internal Democratic emails as a tit-for-tat retaliation in the information struggle. Such a thing would make little sense in the Western conception of geopolitics. But as Mr. Adamsky wrote in his 2015 study, Americans have long tried to conceptualize Russian strategy within Western ways of thinking, when it is anything but.