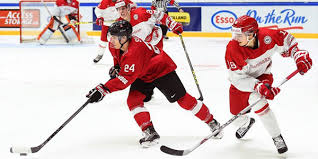 The Danish men’s under-20 hockey team has experienced some bad luck since arriving in Canada on Dec. 14.

In preparation for the World Junior Championships taking place in Toronto and Montreal from Dec. 26 to Jan. 5, the Danes opened their training camp a day after they settled in Cornwall, Ont. Returning World Juniors forward Mathias From injured his leg after an awkward fall to the ice. There is no timeline yet for his return.

Exactly two days later, on Dec. 17, the team was travelling to Montreal for their first exhibition game against the Concordia Stingers men’s hockey team at Ed Meagher arena. The game started 90 minutes late after the Danes were stuck on the highway after an accident. They lost 4-2 to the Stingers.

Needless to say, things haven’t been exactly easy for the Danes since their arrival. However, they’re used to facing adversity—and overcoming it. Against all odds, Denmark has reached the quarterfinals in the past two WJCs.

Last year, they led powerhouse Russia 3-2 in the third period before their rivals tied the game with less than minute left in the period. The Russians won the game in overtime.

“To play with the lead late in the game, that was really fun,” said team captain Alexander True. “It was really disappointing after the game but looking back at it, […] I think it gives us a lot of confidence for this year.”

Success has come in baby steps for the Danes. They have found themselves relegated to the World Juniors Championships Division 1 and then promoted to the elite level—the one that includes the likes of Canada and the United States—in 2008 and 2012.

They were demoted again for three years before making their way back to the top tournament in 2015 when the nation recorded its first ever point in a shootout loss to Russia. They followed that up with their first win against Switzerland in overtime. Finally, in 2016, they once again defeated the Swiss 2-1—this time, for their first regulation win.

Danish head coach Olaf Eller—who is the father of former Montreal Canadiens forward Lars Eller—said his team hasn’t necessarily been on the same level as teams like Russia, but when the puck drops, they matched their opponent’s intensity.

He also credits Denmark’s success to the hockey culture sweeping the nation.

“Many young guys [are] practicing eight to ten times a week, from 11-12 years old,” he said. “They [play] a lot of games, working very hard physically outside the rink [which] makes a huge [difference].”

This year, the Danes are hoping to turn heads again, but it won’t be easy. Denmark finds itself in Group A, the first of two groups in the WJC. This means that they will face stiff competition from the defending champions from Finland, as well as Sweden, Czech Republic, and Switzerland.

For True, the goal is to simply make it to the quarterfinals and then take it from there.

“I think anything can happen in those kinds of games,” he said.

The 19-year-old is one of many returning players from last year’s roster. Forwards Morten Jensen, Jonas Rondbjerg, Mathias From, William Boysen and Nikolaj Krag will provide a veteran presence for the newcomers. Meanwhile, defencemen Nicolai Weichel and assistant captain Christian Mieritz will lead the defensive corps.

The only returning goaltender is Lasse Petersen, who will be competing with Emil Gransøe and Kasper Krog for the starting spot. Last year, goaltending played an important role in Denmark’s success.

“We are to aiming to be [a] hard working [team], playing a simple game with high speed,” explained head coach Olaf Eller. “We think we have a little bit more depth in our team, both offensively and defensively.”

Denmark can use all the experience it can get, especially from players who are coming from Canadian and American hockey teams. Because the WJC is in Toronto and Montreal, the size of the rink is much smaller than that found in Europe. This difference changes the way the game is played.

Typically, smaller rinks are best suited for the north-south style of play, where players are expecting to dump the puck in the opponent’s zone and quickly regain possession and get it to the net. In contrast, larger rinks allow for more creativity and players usually make longer passes and more elaborate plays to get into the offensive zone.

Wejse plays for the Blainville-Boisbriand Armada in the Quebec Major Junior Hockey league, the same team that Concordia Stingers captain Olivier Hinse and rookie sensation Philippe Sanche played for. The 18-year-old, who describes himself as a physical player, feels that moving to North America has benefitted his game—a sentiment echoed by the team captain as well.

“It’s a big opportunity to come over here because you can see more of things,” said Wejse. “People are getting drafted more and more so I find that a good opportunity for me to play over here.”

More Danes Than Ever

There are currently nine Danish hockey players in the NHL, more than ever in league history. From Toronto Maple Leafs goaltender Frederik Andersen to Winnipeg Jets first-round draft pick Nikolaj Ehlers, Denmark’s player turnout has increased over the years. Danish hockey players can now dream of playing outside of Europe.

“Instead of thinking about going to Sweden to play hockey, every Danish ice hockey player is dreaming to go to the NHL [now],” said Eller. “And right now the numbers have reached around 10 players. Fifteen years ago, nobody [thought] about a Danish hockey player in the NHL.”

However, the coach said that there are different ways for Danish players to make it to the big league. For example, Andersen played in the Metal Ligaen, Denmark’s only premier hockey league, for the majority of his junior career. Meanwhile, Eller moved to La Belle Province to pursue his junior career with the Halifax Mooseheads of the Quebec Major Junior Hockey League.

For Eller, it all depends on how the player is progressing.

While many players opt for North America or Sweden during their junior years, the Metal Ligaen and hockey in Denmark is improving. Since 2008, the Danish Ice Hockey Union implemented new training systems, one of which is called Age Training Concept. It allows Danish coaches to track player development closely and to apply appropriate training techniques to the right age groups.

Currently, three players on Denmark’s roster have been drafted by NHL teams in 2016 and came from different junior career backgrounds. The San Jose Sharks chose forward Joachim Blichfeld, who plays for the Portland Winter Hawks of the Western Hockey League. The Saint-Louis Blues went with forward Nikolaj Krag-Christensen and the Chicago Blackhawks drafted Mathias From. Both of these players currently play in the Swedish Hockey League.

Two other forwards, David Madsen and Jonas Rondjberg, are eligible for the 2017 NHL draft.

The World Junior Championship will allow many of these players to prove their worth in the eyes of hockey pundits, professional scouts and fans. The focus, however, remains on the eleven-day tournament where Denmark will get the chance to make history once again. One step at a time.