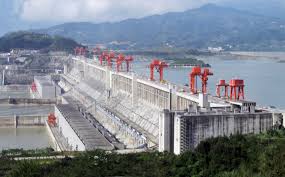 China’s State Grid Corporation, the world’s biggest power company, is on an impressive buying binge. As Bloomberg News reports, the company is “actively in bidding” for power assets in Australia, hoping to add them to a portfolio of Italian, Brazilian and Filipino companies. The goal isn’t simply to invest. State Grid chairman Liu Zhenya has a plan he believes will stall global warming, put millions of people to work and bring about world peace by 2050.

The idea is to connect these and other power grids to a global grid that will draw electricity from windmills at the North Pole and vast solar arrays in Africa’s deserts, and distribute the power to all corners of the world. Among other benefits, according to Liu, the system will produce “a community of common destiny for all mankind”.

It’s a crazy idea. And if this so-called Global Energy Interconnection had been proposed by anyone other than the chairman of the world’s wealthiest power company, it wouldn’t deserve much consideration. But the $50 billion in cash generated by State Grid last year gives the company the deep pockets and political standing to put its priorities on the international energy agenda.

Last September, Chinese President Xi Jinping called for talks on establishing a global grid, while leading research organizations have participated in conferences looking at what would be needed to establish one.

In some ways, extending the grid across national lines seems like a natural evolution. More than a decade ago, a German group proposed a grid that would transmit solar power from North Africa to Europe. In 2012, Masayoshi Son, chairman of Japan’s Softbank, proposed an “Asian Super-grid” that would rely upon giant wind farms in Mongolia to power South Korea, Japan, China and possibly Russia. Earlier this week, State Grid formally joined Softbank, Korea Electric Power and Rosetti PJSC to study the feasibility of such a system.

These schemes would be a boon for wind and solar power producers. But because the grids envisioned are regional, they’d suffer from the uncertainties of relying on renewables. A global grid would solve that problem by linking power generators at the poles and at the equator. The sun would never set on the Global Energy Interconnection, and power would flow day or night.

The question is how to manage such a system. As described in a book that Liu wrote to promote the concept, there would be no central power distributing authority. Rather, an Internet-like smart grid would distribute power as needed, its allocations shifting automatically as the globe turned and different regions reached their peak energy demand.

Technically, the vision is plausible. But Liu’s vision faces considerable geopolitical hurdles, including laws (in Japan, for example) that prohibit importation of power from foreign countries. Likewise, it seems unlikely that China will be able to convince the nations who control the Arctic to open the region to Chinese energy investments.

Then there’s the matter of cost. State Grid estimates it would cost $50 trillion to develop a truly global grid. That would require international buy-in over decades. At a time when short-termism and nationalism are rising worldwide, such a possibility seems remote.

Still, there’s no reason to dismiss Liu’s ambitions. While a super-grid may never be built, bigger and bigger regional networks are sure to grow. The US, which is slowly modernizing its ageing power grid, is uniquely positioned to develop an energy interconnection of its own, or to lead on a regional one. This may be one Chinese idea worth stealing.

Adam Minter is an American writer based in Asia.