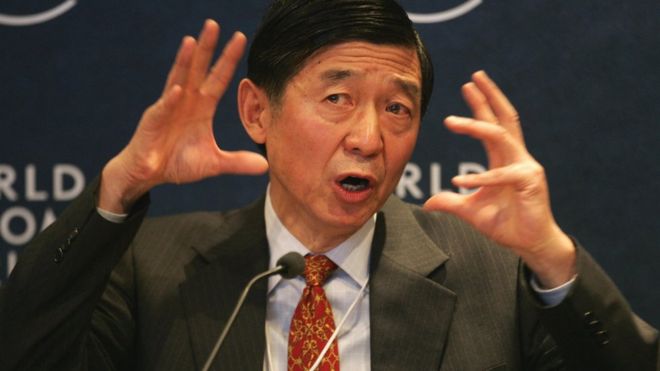 The sudden death of former Chinese ambassador and influential foreign policy “dove” Wu Jianmin has sparked shock and mourning. But, more unusually, it has also prompted a rare moment of reflection in China over how the country should deal with its foreign policy challenges. The BBC’s Vincent Ni explains why.

Who was Wu Jianmin?

Mr Wu was one of China’s most senior and outspoken diplomats. He served as an interpreter for Mao Zedong and his premier Zhou Enlai, and was also China’s ambassador to France, the Netherlands and the United Nations in Geneva at various points in his career.

Before his retirement, he also headed China’s Foreign Affairs University in Beijing, which has trained generations of Chinese diplomats.

Following his death in a car crash in Wuhan on Saturday, Mr Wu’s views have been the subject of discussion on the Chinese internet and among China’s intellectuals and foreign policy commentators.

Why has his death sparked such a reaction?

Mr Wu’s views have not always coincided with those of China’s leaders. He has argued that China should keep a low-profile in the international arena – a popular policy during the 1990s and 2000s, which many analysts believe has been altered by President Xi Jinping’s more assertive stance since 2012.

In a 2014 TV debate with a hawkish major general, Mr Wu warned that those who engage in conflicts will themselves be dragged into trouble. More recently, he also pointed out that China’s parochial nationalism is rising and urged China to reject it for continued progress.

Mr Wu has also shared his opinions with Western media. In a rare interview with the BBC’s Hard Talk programme in London last year, he said that China is not a superpower, nor is it in a position to replace the United States.

Mr Wu’s comments still resonate with many in China right now, coming at a time of high tensions in China’s bitter territorial disputes with its neighbours in the East and South China seas.

Many worry that the current war-of-words might eventually lead to military standoff in the Asia Pacific region, and have been sharing Mr Wu’s previous remarks on how China should deal with its neighbours and the West to make a point.

Why else was he important?

By openly expressing views that were not fully in line with the government’s, Mr Wu also provided the outside world a rare glimpse into the kind of debate within China’s close-knit and closed-off foreign policy circles.

In a speech delivered to the Foreign Affairs University in April, Mr Wu summarised China’s diplomatic dilemma with a saying: “One who can’t find friends also offends many”. And he revealed to students that China’s foreign policy is not set by its foreign ministry, but by the central government.

He has also had a war of words with the editor of the often sensational and nationalistic tabloid Global Times, which is frequently viewed as a party mouthpiece.

Mr Wu criticised the paper for printing “very extreme articles” and lamented that its editor Hu Xijin “doesn’t quite understand the situation”.

This prompted a lengthy response from Mr Hu, who dismissed Mr Wu’s views as outdated and “typical” of dovish diplomats. Mr Hu also argued that the media is always more hawkish than diplomats.

Such arguments are nothing unusual in many Western countries – but in China official statements and the media are carefully controlled, so the row caught the attention of many analysts.

“Such debates suggest that behind the scenes, there’s probably a much more vigorous, perhaps even destabilising debate going on,” Orville Schell, who heads the Asia Society’s US-China Centre and has known Wu Jianmin for more than a decade, told the BBC.

“It’s a pity that there aren’t more of them.”

What do his critics say?

Mr Wu’s critics argue that his views were simply out of date, and did not reflect China’s real strength and the current international dynamics.

“What he had advocated was entirely correct, but he neglected the fact that time has changed and China has also changed structurally. Therefore, frictions between China and the West are inevitable,” Mr Qiu told the BBC.

On the internet, Mr Wu’s critics lamented his view of the world as “too nice to Americans”.

One commenter on the Global Times website urged: “At a time when Americans are suppressing us, please do not praise this man. It will backfire.”