In Danske Bank’s quarterly Nordic Outlook report, published Wednesday, the bank predicts the magnitude of Brexit’s effects on the Nordic countries, as observed by Reuters. The report predicts that the effects be immediate and severe, pushing Finland and Denmark into a recession.

Our best estimate is that growth would suffer already in the second half of 2016, when Denmark and Finland could tip into recession, given the low level of growth to begin with. On annual GDP, the effect should be most visible in 2017. 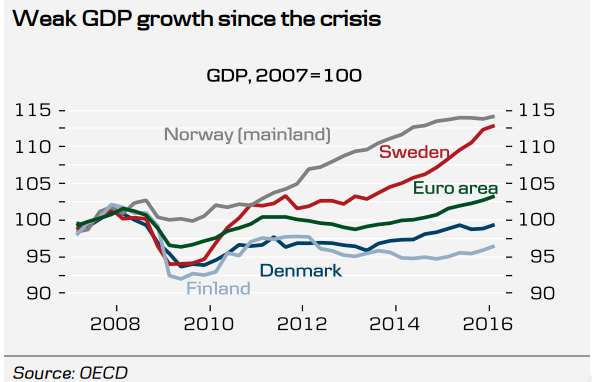 GDP will shrink dramatically over the whole Nordic region, as all the countries are deeply entangled in the fate of the UK and the EU.

A Brexit would likely shave off 0.5 to 1 percentage points of our growth forecasts for next year for the Nordic countries. Denmark would suffer from its close integration with the European economy, Sweden and Finland from their reliance on exports of investment goods and Norway from a likely drop in the oil price.

Danske Bank notes that there are mitigating factors and actions that might make the blow less severe. Here are some proposed measures:

Norges Bank has room to cut rates further to soften the blow from a Brexit, while the Swedish Riksbank could extend its QE programme. Denmark could experience safe-haven inflows, leading to downward pressure on interest rates, on top of any easing from the ECB.

The Brexit referendum will take place on Thursday, June 23.

Amidst the anxiety over the economic consequences of the UK leaving the EU, the Nordic countries are also getting worried that a Brexit could start national discussions about following suit and leaving the EU as well.

Some Danish political parties have already started calling for an EU-referendum. This is worrying Sweden. Irene Wennemo, state secretary to Sweden’s minister for employment said to International Business Times UK on Tuesday,

“‘Swexit’ is not a question in the public debate at the moment but it will be if Denmark starts to discuss its membership.”